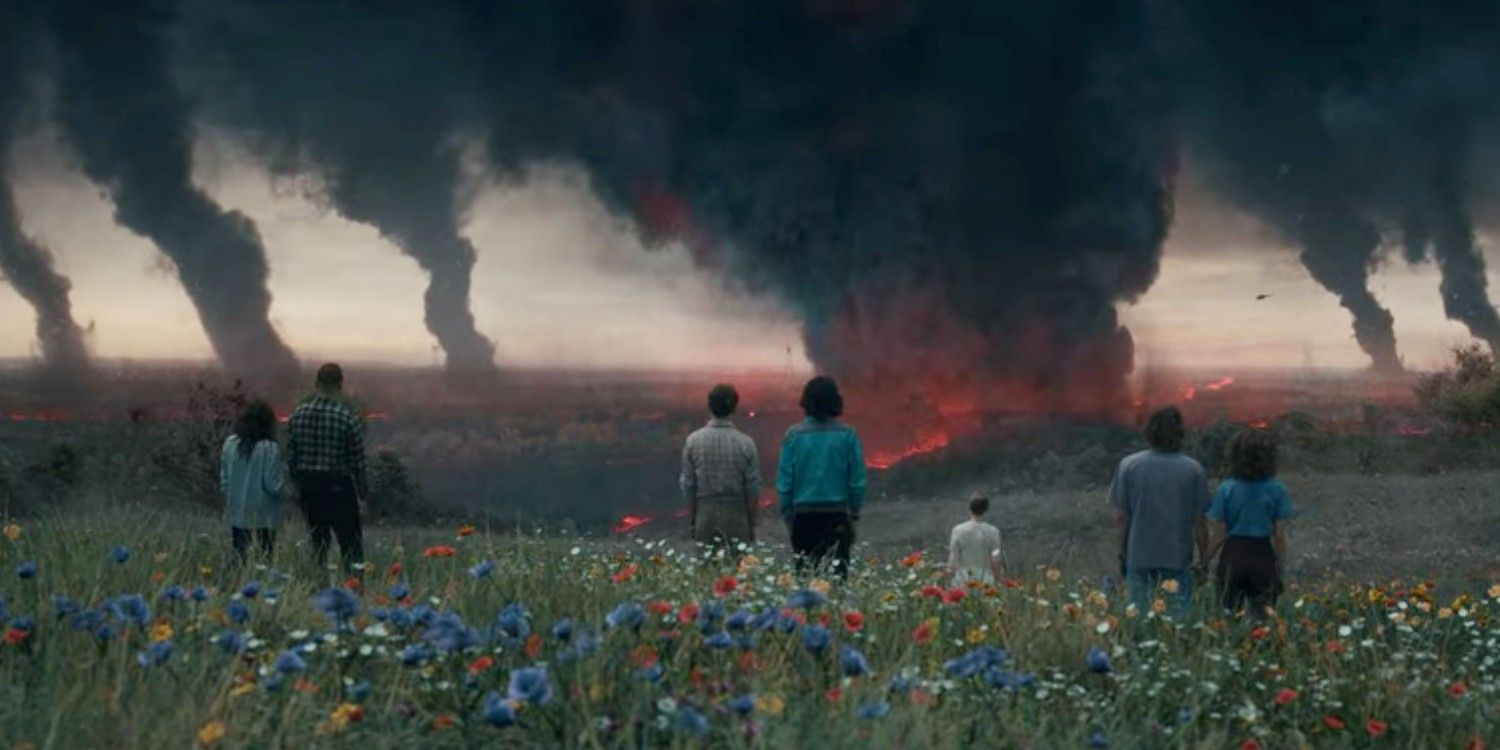 Speaking on the fifth and final season of the show, the Duffer brothers have talked about a potential time jump in Stranger Things. Unless wildly drastic, this jump will likely keep the show locked in the 1980s, something it capitalizes on hugely through its aesthetic and musical choices as well as with references and easter eggs to properties booming at that time like Star Wars.

With Star Wars being such a big deal and the Stranger Things characters and creators alike loving the franchise, it is no surprise that the show is littered with easter eggs and references to the Galaxy far, far away.

The similarities between Stranger Things 4 and The Empire Strikes Back are there for everyone to see.

The Duffer Brothers have even talked about the iconic sequel’s influence on the season (via Collider). From the central villain seemingly winning to a hero ending up incapacitated (Max in a coma and Han in carbonite) to the remaining heroes staring out into the distance, knowing a fight is ahead in the final shot, the two are intrinsically linked.

With the original trilogy being a commercial phenomenon like no other, the 1980s were full of iconic Star Wars toys, and it is no surprise that the kids in the show have a few.

Mike proudly shows off his Yoda action figure to Eleven in the first season while the gang also asks her to levitate his Millennium Falcon toy. Another great scene involving a Star Wars toy comes when Dustin returns from camp and his friends control his robot/droid toys, with one of them being none other than R2-D2, Star Wars’ most famous and perhaps best droid.

Yuri proved an important component to the Russia storyline of season 4 with his betrayal, his Katinka, and his plane. However, the latter had some familiar sound effects.

It is tough to notice the sounds, but when Yuri is working on his plane and smacks it to work, that sound effect – as noted by the show’s lead sound effect editor – is in the spirit of Han’s hyperdrive failure in The Empire Strikes Back (a subtle yet excellent audio reference).

The Star Wars franchise is chock full of brilliant sound effects, and another one referenced in Stranger Things is the Death Star alarm.

In season 3, the secret Russian base has an eerily similar alarm, slightly different in pitch, but very much the same effect as that used by the Imperials; another not-so-obvious but superb easter egg for hardcore fans.

The similarities between Eleven and the Force users of Star Wars have been pointed out a bunch, specifically through Eleven’s special powers and specific scenes involving her.

She is even described to Will by Mike in a Star Wars reference at the end of season 1 as being “More like a Yoda” than a wizard. From her lifting the X-Wing from the swamp moment in season 2 to holding her hand out to use her powers, there are definitely connections there.

When Mike and Dustin have to ask Eddie to postpone the game of D&D due to Lucas’ basketball game, Eddie asks, “You saying Sinclair’s been taken in by the dark side?”

This is, of course, a reference to the side of the Force used by Sith and the evil Force-using characters, and ironically, on paper, outsiders would be more likely to associate it with Eddie and Hellfire Club rather than with the Hawkins basketball team.

If there is a Han Solo counterpart in Stranger Things, it is Steve Harrington. But, it is actually Steve’s best bud Dustin who quotes the iconic smuggler in season 4 of the show.

While playing Eddie’s brutal D&D campaign with Hellfire, Dustin says this iconic line after the other players tell him the odds are against him. It is a fitting nod to Han – who says the line to C-3PO just before the epic asteroid field sequence – from Dustin, who produces more references to Star Wars than anyone else.

Many fans believe the first season of Stranger Things has yet to be topped, and one of its many, many amazing scenes comes when Dustin, Mike, Lucas, and El are hiding out on a bus and begin communicating with Joyce and Hopper.

In a state of paranoia, the kids wonder if the adults are being held hostage and forced to say things akin to what Lando Calrissian gets forced to do in The Empire Strikes Back. The film is not only considered the best produced by Star Wars but is the one that is referenced most by Stranger Things.

Droids in Star Wars are often disrespected, with the best droids frequently saving the day, not least of all R2-D2, who is said by Mike to be as useless against Darth Vader as Lucas’ wrist rocket is against the Demogorgon.

This is not only unfair to Lucas’ wrist rocket, which did prove itself valuable, but to George Lucas’ R2-D2, who, while having no chance at causing anything but emotional damage to Darth Vader, is far from the weakest or most helpless character in the original trilogy. Throughout Star Wars, Artoo has shown his alliance and worth as one of the franchise’s underappreciated heroes.

A couple of adored Star Wars quotes pop up throughout the saga, and perhaps the best of the lot is “I have a bad feeling about this,” which finds its way into every Star Wars movie as well as Stranger Things 4.

While headed back into the Russian prison in volume 2, Murray notes, “I don’t know Jim, I got a bad feeling about this.” There is a possibility this was accidental – Murray would genuinely have a bad feeling about a plan like that – but given the slew of other Star Wars references, that seems unlikely.

The hype for Star Wars unquestionably died down in the late ’80s as it slightly stepped back from the forefront of the pop culture conversation. However, it was still around, even having programming through children’s animation shows like Ewoks.

In season 4 of the series, this show can quickly be seen on Byers’ TV as Jonathan and Will sit watching it. This is a show that the ’80s babies are familiar with, but without Disney+, its existence may have been largely forgotten.

Steve and Robin are undoubtedly one of the best duos in Stranger Things, and their friendship produces some fantastic moments, not least of all their interview with Keith at the video store in which Steve shows his clearly strong love of Star Wars.

Questioned on his favorite movies, Steve announces one of them to be Star Wars, specifically “The one with the teddy bears, duh.  *attempted Ewok sounds*” The Ewoks have been likened to teddy bears many a time, and it is no surprise that Steve does not know their actual titles. Had Dustin been there, he likely would have roasted Steve in a state of pure disappointment.

Some references in Stranger Things are not spoken but rather mirrors of what happens in the Galaxy far, far away, such as when Sullivan and his troops enter ‘the Nina Project.’

In its blocking, camera shots of each side and on individual soldiers’ faces, and general vibe, the scene is similar to Vader and his troopers boarding the Tantive IV (where one set of troops eliminated the other to the big bad entering in the aftermath of the death). Both are fantastic scenes.

Steve and Dustin’s friendship blossomed in season 2 and further established itself as an all-time TV friendship in season 3, consistently bringing smiles to audiences right from their first moments.

Upon his return from camp, Dustin meets Robin and asks for Steve, and the two embrace in a wholly dorky but supremely wholesome handshake where they duel with fake lightsabers, sound effects and all. It is one of their very best scenes together and one of the best Star Wars references in the show.

NEXT: The Biggest Duffer Brothers Reveals About Stranger Things 4

With Stranger Things characters and creators alike loving Star Wars, it is no surprise that it is full of easter eggs and references to the franchise.