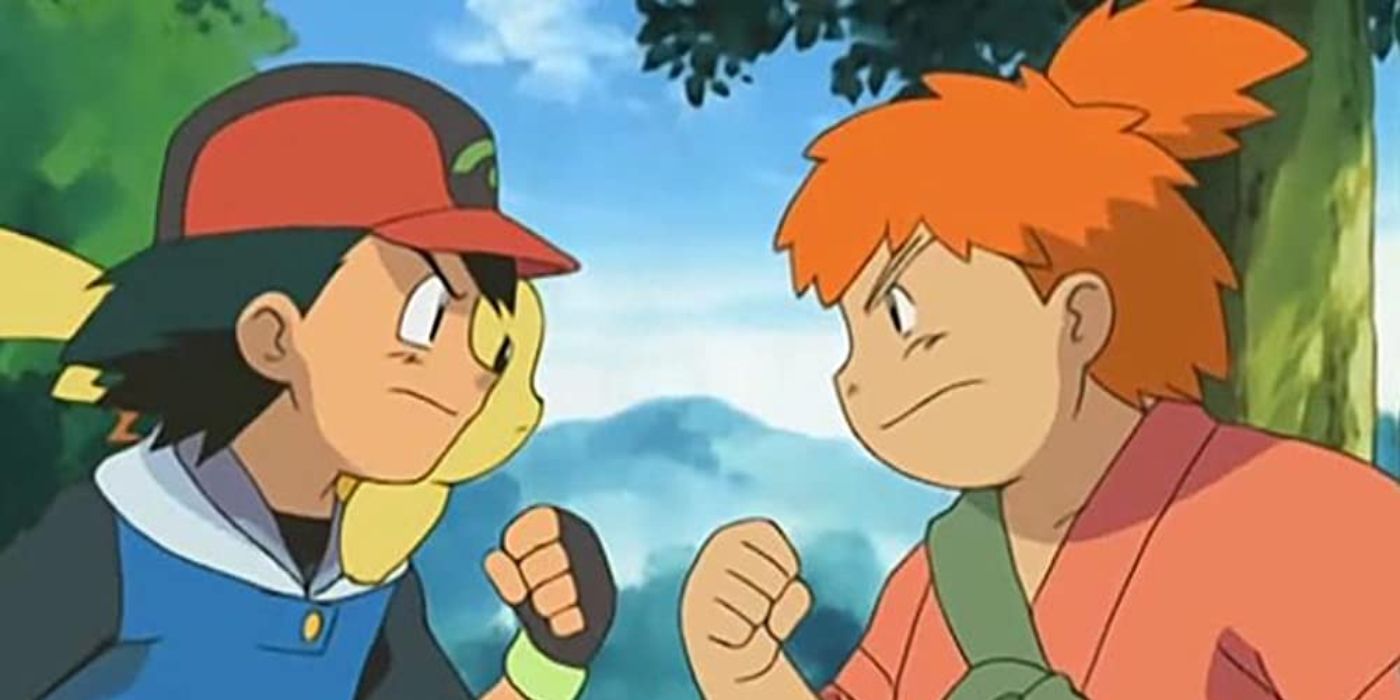 Rivals are a core part of the Pokémon franchise, both creating a nuisance and challenge for players in the Pokémon video games, as well as for Ash in the Pokémon animated series. As the anime often loosely follows the storyline and structure of each new video game title by keeping the new region, gym leaders, and key opponents, many are curious about Ash’s next rival. Having already traveled over eight regions, Ash has met many challengers – yet some stand out significantly over others for their strength, friendliness, or wisdom.

Morrison is a trainer from the Hoenn region who appeared throughout the Ruby and Sapphire era of the Pokémon anime. Morrison is a strong trainer who did a decent job participating in the Hoenn League.

RELATED: 10 Pokémon You Forgot Ash Caught In The Anime

Unfortunately for Morrison, despite winning his matches in the first three rounds of the league, he had no real standout qualities through his battle and training style, nor his Pokémon team. While he has Pokémon that are usually considered powerful fighters, such as Swampert and Steelix, Morrison never stands out as a real threat, and is ultimately rather forgettable.

Barry is a trainer from the Sinnoh region and is a rival of Ash through the Diamond and Pearl era of the Pokémon anime, and the rival to the player character in the Pokémon Daimond, Pearl and Platinum video games as well as their remakes, Brilliant Diamond and Shining Pearl.

Though Barry is known for having one of the toughest final battles in the Pokémon video games, he lost to Ash in almost every battle against him throughout the anime, and lost terribly to Paul. Barry has a strong team, but Barry’s time on screen does very little to showcase this and leaves some fans feeling like he didn’t quite live up to the expectation that his in-game counterpart set.

Kiawe is a trainer of the Alola region, and an extremely strong side-rival and friend to Ash throughout the Sun and Moon Pokémon anime era. Kiawe and Ash have a friendly rivalry that always leads them to battle each other, resulting in them both becoming stronger.

Kiawe and Ash turned many situations into competitions, and were always ready for a sparring match with their Pokémon, but they were great friends along the way. Kiawe was a strong trainer who made it all the way to the semi-finals of the Alola League, only missing out in a battle against Ash in the final due to a loss against Gladion.

Trip is a confident trainer from the Unova region who plays the role of rival to Ash throughout the Pokémon: Black and White anime era. Trip is a cocky trainer, having defeated Ash in every battle prior to the Unova League, and was the winner of the Pokémon World Tournament Junior Cup.

Trip may have proved his strength over Ash with the evidence of their win-loss record, but fans could not bring themselves to enjoy his character. Many viewers felt he was somewhat a carbon copy of rival Paul from the generation prior, keeping the annoying personality and cocky persona without all the other key elements and character arc that make Paul so interesting.

Sawyer is a Pokémon trainer from the Kalos region who befriends Ash and begins a friendly rivalry with him throughout the Pokémon: XY anime era. Sawyer was a trainer who started relatively weakly but worked extremely hard by taking notes and lessons from other trainers, including Ash.

Watching Sawyer study intensely and grow in strength throughout the story was a pleasant development that the audience enjoyed, with him becoming a talented strategist. After much hard work, Sawyer developed and honed his skills to a point where he was capable of defeating Ash. Many fans adored watching his hard work pay off when this occurred, making Sawyer a perfect representation of a well-written friendly rival.

Ritchie is a friendly rival to Ash throughout both the original Pokémon anime taking place in the Kanto region, as well as throughout the Johto region era. Ritchie is known for nicknaming all his Pokémon, with his most significant being his partner Pikachu, named Sparky.

Ritchie is a Pokémon trainer that many fans wish had been given more screen time, as he was a very interesting rival to Ash due to their similar Pokémon. Ritchie was a strong trainer who had a close bond to his Pokémon, and he mirrored many aspects of Ash’s personality and training style. Richie was also capable enough to make it into the top 8 of the Kanto League, proving his skill as a trainer and challenger to Ash.

Gladion is a trainer and competitor to Ash during his adventures in the Alola Region throughout the Pokémon Sun and Moon anime era. Known for battling with his signature Pokémon, Silvally, Gladion did a much better job at being a rival to Ash than many characters from previous generations.

Gladion is a talented Pokémon trainer who defeated Ash many times during their adventures. The two grew in strength throughout the story, and their last battle in the Final of the Alola Pokémon League is now considered one of the greatest Pokémon battles throughout the entire anime.

Gary Oak is the first rival Ash ever has, with their competitive relationship starting from the beginning of their journeys in the Kanto region. He is known for using his Blastoise in battle, often opposing Ash’s Charizard to use type advantage, as Blastoise is known as one of the strongest water type Pokémon.

Gary is confident, cocky, and often enjoys mocking Ash and rubbing his achievements in his face. However, as Professor Oak’s grandson and an exceptionally skilled trainer, Gary gave Ash some of the best Pokémon battles throughout the entire franchise. The two even ended up understanding each other and becoming friends during the Johto Region era, making their rivalry one of the best-written stories in the Pokémon anime.

Alain is a powerful Pokémon trainer from the Kalos region, and a friendly rival to Ash throughout the Pokémon: XY anime era. Alain’s undeniable strength was only maximized with his Charizard, who was capable of Mega Evolution, and they are known as one of the most significant trainer and partner Pokémon duos in the franchise.

Alain never lost a single match to Ash throughout their time as rivals, even when Ash opted to use Greninja, his most powerful Pokémon. After honoring a promise to Ash and joining the Kalos League so they could battle again, he won the entire tournament and became Kalos League Champion – only proving how strong he was.

Paul is a trainer from the Sinnoh region and is the most significant rival to Ash throughout the Diamond and Pearl era of the Pokémon anime. Paul is known for being an extremely tough trainer and the polar opposite of Ash, as he has a terrible attitude and prioritizes the training and brute strength of his Pokémon over friendship and bond.

However, Paul is extremely driven to become a powerful trainer, managed to either defeat or tie with Ash in every one of their battles prior to the Sinnoh League, and stood out as the most intense rival Ash had ever faced. Ash’s rivalry with Paul was only ignited further when Paul abandoned his Chimchar for being too weak, with Ash befriending it and adding it to his team. This was a key moment of the story, and their League battle was one of the best in the franchise, with both Ash and his now evolved Infernape aiming for revenge against Paul in battle. Despite their heated rivalry, Ash and Paul were also able to learn from and respect each other by the end of the Sinnoh journey, making their rivalry an absolute standout among others.

NEXT: The Most Anticipated Upcoming Anime Releasing In 2022

Ash Ketchum has made many rivals throughout his journey as a Pokémon trainer. Which of his many rivals are the best, and why?