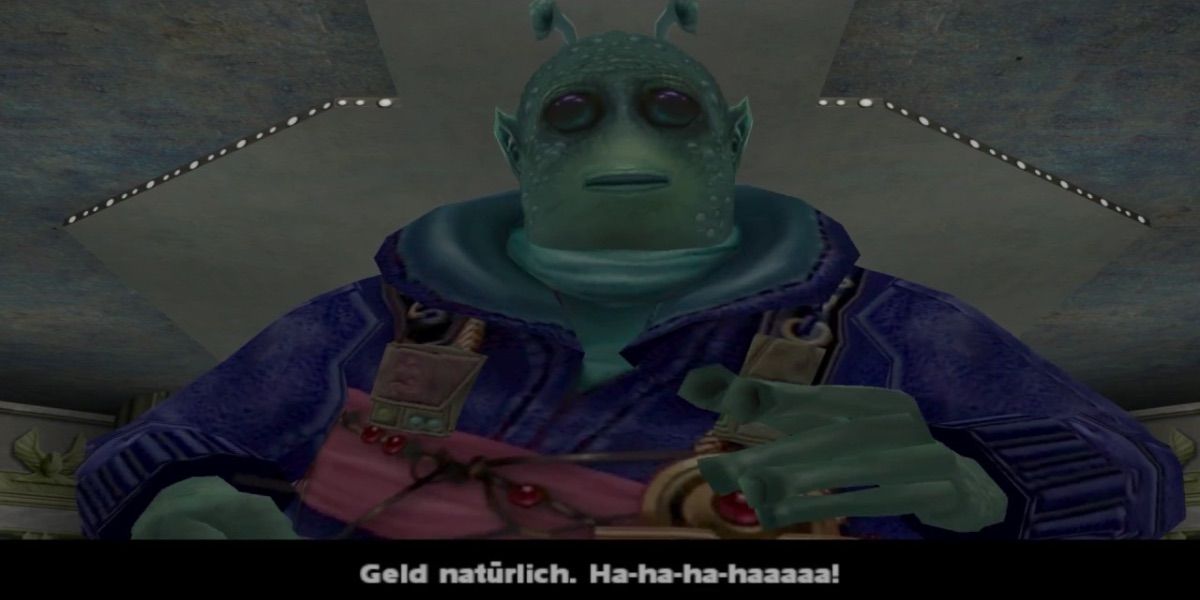 With Star Wars: Hunters on the horizon, fans of the franchise have a lot of video game action to look forward to. Over the years, the Star Wars films have given way to a plethora of great video games that introduced new and exciting characters, especially villains, to the universe.

From recognizable baddies such as Darth Vader to extended-universe legends such as Admiral Thrawn, the Star Wars video game universe is a retched hive of scum and villainy. Though plenty of great goons have come from the games, the most dastardly of them left enough of a real impression on players and became a larger part of Star Wars lore.

Most villains in the Star Wars games are powerful Sith Lords or dangerous bounty hunters, but Reelo Baruk proved to be a simple yet effective thug. The Rodian gangster had close ties to Jabba the Hutt and had his greedy fingers in several criminal pies until he ran afoul of Jedi Kyle Katarn in Jedi Knight II: Jedi Outcast.

Providing the muscle for Dark Jedi Desann’s Empire Reborn faction, Reelo Baruk even captured Lando Calrissian following Han Solo‘s misadventure on Bespin. While Reelo may not be the most powerful villain, he stood out among the rest and showed a different sort of dark side.

Though he isn’t one of the most famous Wars villains, General Rom Mohc was the antagonist in one of the best Star Wars games of all time. Mohc was a celebrated veteran of the Clone Wars who joined the Empire and became obsessed with cybernetics.

As laid out in Dark Forces, Mohc’s quest to develop the ultimate soldier led him to create the Dark Troopers and he even gained the support of Darth Vader. Though he was eventually vanquished by Kyle Katarn, Mohc nearly used his brand new technology to defeat the young Jedi.

Sporting a sinister looking piece of eyewear, the Dark Jedi Jerec allowed himself to succumb fully to his dark impulses and become a heel. Jerec worked as a fearsome Inquisitor for the Empire, and went about his duty with clinical precision that bordered on obsession.

Jerec became the object of Kyle Katarn’s revenge after the Dark Jedi infiltrated the Valley of the Jedi in search of the trapped force power that the valley contained. Jerec was a particularly ruthless villain who really showed the true evil of the dark side, and the corrupting influence that absolute power can have on someone.

Having already been established as one of the biggest Star Wars movie villains of all time, it was only natural that the bounty hunter Boba Fett would make his way to video games as well. The notorious scoundrel wasn’t the main adversary of Shadows of the Empire, but he served as a truly memorable boss battle.

With hero Dash Rendar hot on his heels, the jetpack sporting baddie does battle on a landing pad, and shows off his impressive arsenal of weapons. He was already shown to have defeated another bounty hunter earlier in the game, and though he was defeated by Rendar, he lived to fight another day.

Few could have the ear of Emperor Palpatine during the Galactic Civil War, but the Falleen Prince Xizor was one such person. Lusting for power within the Empire, Xizor enacted a plan to kill Luke Skywalker in order to lower Vader’s standing, and thus make himself the Emperor’s right hand man.

What he hadn’t counted on was an attack from Dash Rendar who was aided by several other notable heroes in rescuing Princess Leia. Though he was a physically imposing specimen, Xizor’s real power came from his wealth and connections that could be just as dangerous as any force user.

Though Jedi Fallen Order added great things to Star Wars canon, it also helped to flesh out previous characters and ideas in a more exciting way. Following the Jedi Purge, Darth Sidious established the Inquisitorius as a group of ruthless evil Jedi who were tasked with hunting down Jedi who survived the massacre.

In Fallen Order, hero Cal Kestis is pursued by the Inquisitorius and must do battle with the dangerous assassins on order to survive. The Inquisitors were mostly turned to the dark side through torture, and that gave them an extra tough edge when it came to executing their orders. More of a group than a single entity, when acting together the Inquisitorius presented an exceptionally deadly challenge.

The heroes and villains of The Old Republic are legendary within the Star Wars fandom, and one of the most unique baddies is certainly Darth Malgus. A notoriously powerful Sith who oversaw some of the most successful military attacks during the reign of the Sith Empire, Malgus chafed against authority and had his own way of doing things.

Generally regarded as one of the most powerful Sith of all, Malgus fought for constant change within the Empire, and had somewhat progressive political views when it came to race. However, he was still an unbelievably ruthless conqueror who eschewed a political position in favor of more frontline action.

Star Wars has its fair share of truly evil villains, but Darth Nihilus existed in a realm all by himself when it came to absolute villainy. Imbued with nearly endless Sith power, Nihilus existed only to consume worlds and had committed genocide on a planetary scale just to satiate his quest for power.

Donning a skull-like mask to only drive the point home more, Darth Nihilus was the Star Wars equivalent of the Grim Reaper, and he often acted on that distinction. What made Nihilus such a compelling villain was that his evil came from a deep-seated hatred of all life, and there was nothing he wouldn’t do to harm others.

Admiral Thrawn was already a notable figure in the extended universe before his appearance in TIE Fighter, but the game helped to solidify his place in the canon. The brilliant military strategist issued commands throughout the game, and was actually the driving force for the story that runs throughout.

While he wasn’t technically a villain in TIE Fighter because the user plays as an imperial soldier, he was nevertheless an evil-doer. His leadership abilities were unrivaled, and his tactical know-how gave him the advantage against the rebel forces that he deemed to be inferior.

Darth Vader’s character arc is the stuff of Star Wars legend, but The Force Unleashed allowed users to learn more about the man in the black helmet. Acting as secret master to Starkiller throughout the game, Vader was actually the antagonist, despite the fact that he never fought his apprentice.

By using Starkiller for whatever he wanted, Vader was shown to not only be untrustworthy, but downright villainous as well. Obviously, fans had already seen how ruthless Vader could be in the films, but the fact that he would repeatedly betray an ally made him an even bigger heel. Because he came into the game with an established backstory, his ongoing narrative only added to his intrigue and helped to cement his place as the ultimate Star Wars villain.

NEXT: The 10 Best Lightsaber Customization Across The Star Wars Games, Ranked

From Darth Vader to Admiral Thrawn, these are the 10 best Star Wars video game villains of all time.