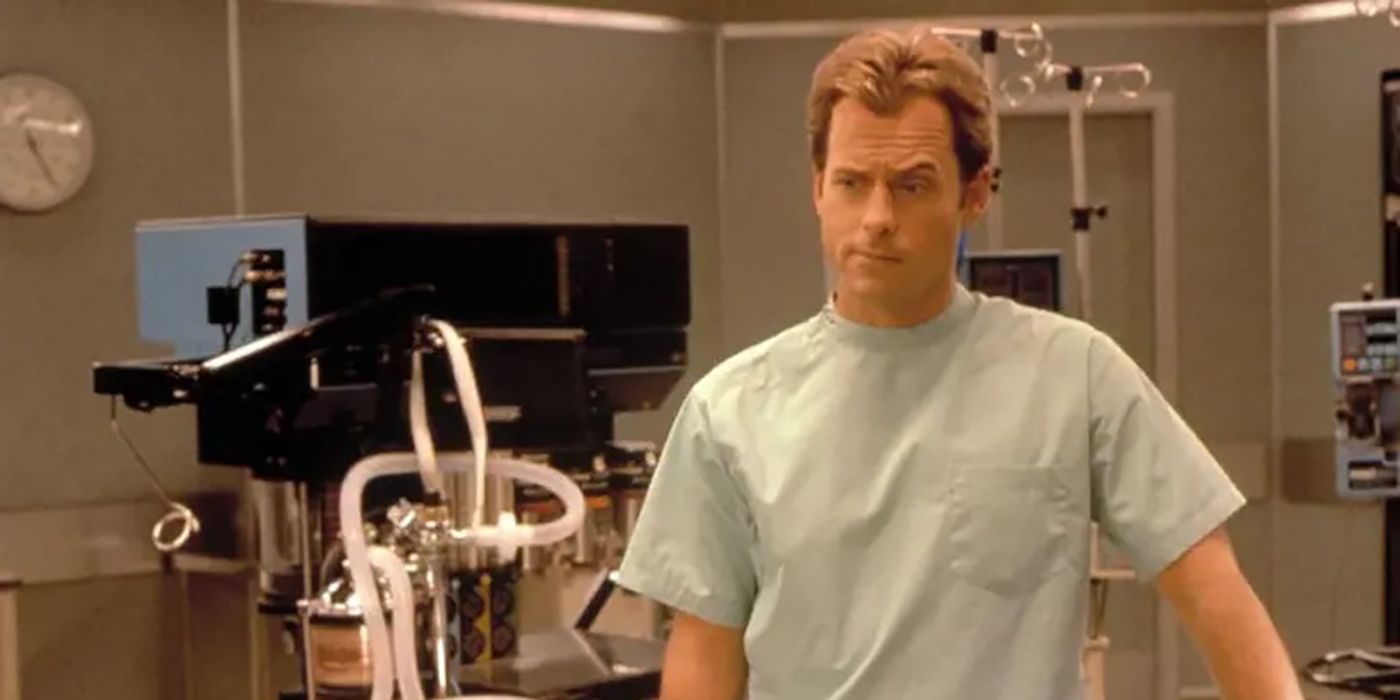 Greg Kinnear, who most recently appears on the Apple TV+ original series, Black Bird, might just be one of the most under-rated actors of this generation. With a career spanning decades, he was in blockbusters like We Were Soldiers and Little Miss Sunshine and he has had great roles beyond those as well, including both on film and television.

According to the review aggregator website Rotten Tomatoes, a few of these projects stand out with an over 80 percent rating. But when it comes to movies, all his other movies rank below 80%, including some fan-favorite films like Anchorman 2: The Legend Continues (75%) and classics like You’ve Got Mail (69%) and We Were Soldiers (64%).

The black comedy premiered in 2000 and starred Renee Zellweger as a housewife/waitress who, following a breakdown due to witnessing her husband’s brutal murder, enters a fugue state and thinks she’s a nurse in a popular soap opera. In this state of mind, she decides to start pursuing her favorite TV soap opera character, Dr. David Ravell, an actor named George McCord (Kinnear).

Nurse Betty was applauded for being funny and quirky, along with for its talented cast, Kinnear included. It also ranks among Renee Zellweger’s best film roles, according to Rotten Tomatoes.

In this 2016 film starring Kerry Washington as Anita Hill, who alleged that she was sexually harassed by Clarence Thomas, Kinnear plays now-President, Joe Biden. At the time of the events depicted in the movie, Biden was a U.S. senator.

The movie was praised by critics, and though Kinnear’s role was small and Washington was the star, he added tremendously to the story. Kinnear said that he appreciated the role gave him the opportunity to “look under the hood at the machinations of all that was going on,” according to IndieWire.

Winning multiple Primetime Emmy Awards through its run, it’s no surprise that Modern Family ranks among Kinnear’s best roles. Even though it was only a small guest starring role, one of many guest stars on Modern Family, Kinnear earned one of only two Emmy nominations for it.

On the popular and long-running sitcom, he played Tad, a potential new client for Phil who is looking to sell his house. While Phil is oblivious to Tad’s advances, he seems very affectionate towards Claire, even kissing her on the mouth to say goodbye. It’s only when they visit Tad’s home that they realize he kisses everyone in the same way, including his family members, and meant nothing by the odd, seemingly flirtatious and brazen behavior.

In this 2008 fantasy comedy movie, Ricky Gervais stars as Bertram, a dentist who can see and talk to ghosts. Tea Leoni, meanwhile, stars as a young window and Kinnear is her recently deceased husband Frank, who was accidentally killed after being hit by a bus.

Frank promises Bertram that he can help get rid of the other ghosts if Bertram will help break up a wedding between his widow and another man who he thinks is not being honest with her. Dubbed one of the best romance films that year by Rotten Tomatoes, critics on the site give it high marks.

Jack Nicholson and Helen Hunt are the stars of this 1997 romantic comedy-drama about an obsessive-compulsive, surly, and mean novelist who meets and falls in love with a single mother with a chronically ill son. It’s one of Jack Nicholson’s best movies, according to IMDb.

Kinnear, meanwhile, plays the gay artist Simon in the movie, one of Melvin’s (Nicholson) neighbors who is assaulted and almost killed. While Simon recovers, Melvin is tasked with caring for his dog and develops an emotional attachment to the furry friend that helps him get in touch more with himself. It’s this role that earned Kinnear his only Academy Award nomination to date.

In this 2020 British comedy-drama movie, Kinnear plays comedian Bob Hope. The setting is the 1970 Miss World competition in London, where Hope is the host. Despite the competition clearly objectifying women, it was the most watched TV show in the world at the time. But the tides were changing and a new women’s liberation movement invaded the stage to disrupt the broadcast.

Also starring Keira Knightley, Gugu Mbatha-Raw, Rhys Ifans, and Suki Waterhouse, Misbehavior was lauded for its “crowd-pleasing” story. Naturally, as Hope, Kinnear had a central role in the movie that had a largely female cast.

One of four main characters in this 2001 comedy-drama acting alongside Dennis Quaid, Andie MacDowell, and Toni Collette, Kinnear played Tom, one of a tight-knit group who has been friends for years. When they meet for dinner and Tom is missing, his wife eventually reveals that he is leaving her for a flight attendant and they had been having troubles in their marriage.

The three get into heated discussions as they talk about the relationship issues and lay blame, each taking their own perspective and viewpoint on the things that have been happening. As the situation unfolds, the movie explores how the breakdown of the marriage and revealed secrets can lead to a breakdown of mutual friendships, too.

Kinnear plays Richard in this tragicomedy road film about a family prepping their young daughter to compete in a child beauty pageant, a Type A father who is trying to become a popular motivational speaker and life coach.

The 2006 movie, which also starred Steve Carrell, Toni Collette, Abigail Breslin, and Alan Arkin, has been described by critics on the site as “delightfully funny” with Kinnear being singled out as having one of the best performances. It’s one of those few feel-good movies that doesn’t focus on love or relationships.

In this 2016 drama film, not to be confused with the 1998 TV series of the same name, Kinnear plays the lead role of Brian, a man who decides to move his family into an apartment in Brooklyn they have inherited from his recently deceased father.

The focus, however, is on Brian’s son Jake and his new friend Tony, the son of a woman who runs a dress shop in the building. When she and Brian, however, are at odds due to rental increase conflicts, Jake is devastated when he loses his friend. With an almost perfect rating, critics love how Little Men examines how parents’ actions can impact their children’s friendships.

His most recent role is his best-ranked one: Kinnear plays Brian Miller, a detective investigating the case of a murdered young girl and a potential serial killer. While he is convinced they have their man in Larry, others believe the troubled recluse is simply looking for attention and didn’t actually commit the crimes.

One of the things fans might not know about Black Bird is that it is based on a true story. The focus is Jimmy Keene and the offer Miller and his partner Lauren present him with (to extract a confession from Larry in exchange for his early release). But Kinnear’s performance provides added heart to the story. He’s a man and a father who simply wants desperately to find justice for a young girl who happens to be around the same age as his own daughter, and ensure a suspected killer isn’t released to strike again.

NEXT: 10 Shows To Watch If You Like Apple TV+’s Black Bird

Greg Kinnear might be one of the most underrated actors of this generation and has been involved in higly-rated movies with little Oscar recognition.