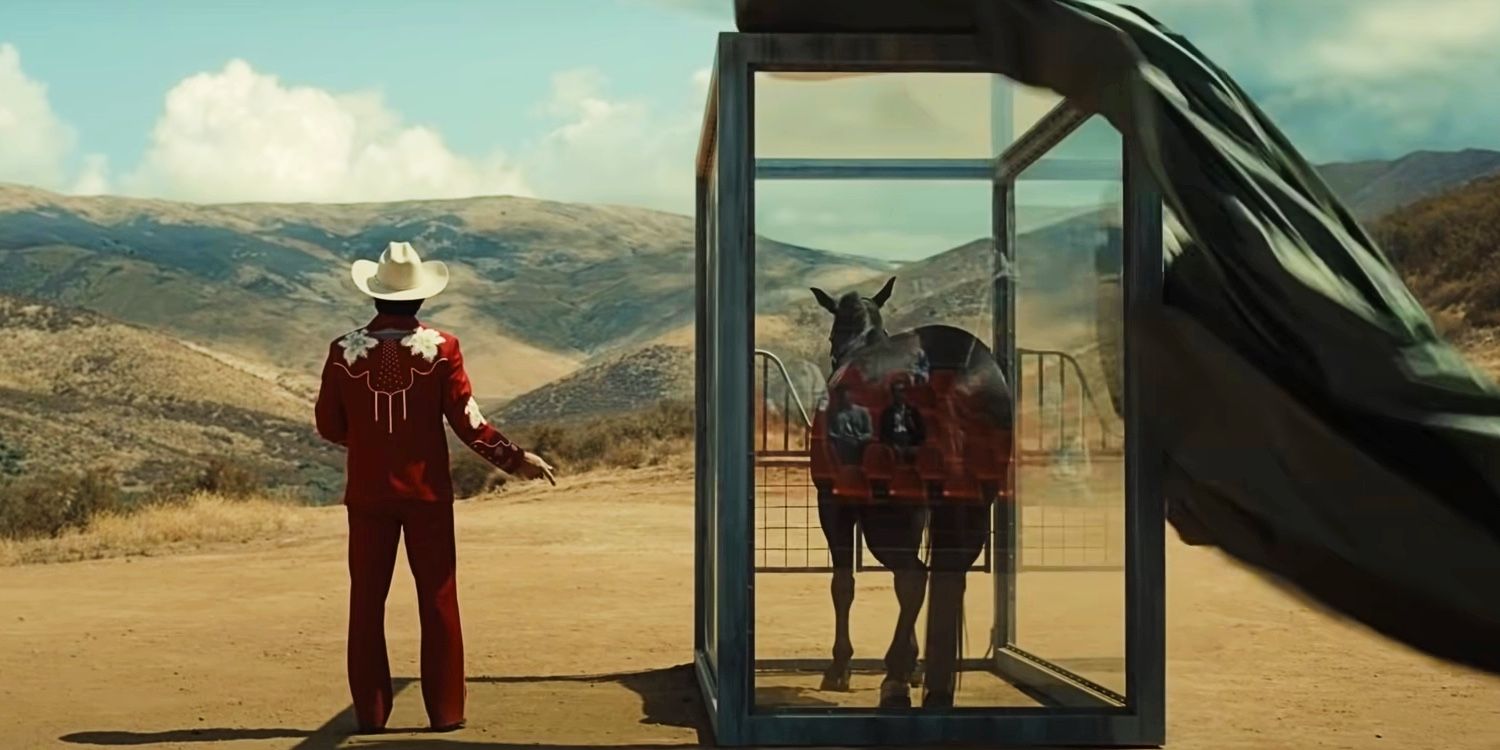 Jordan Peele movies are known for their layers and hidden meanings, and Nope continues that tradition by placing carefully hidden details throughout its harrowing story of an extraterrestrial terrorizing the Haywood family ranch. Eagle-eyed fans can delight in the fact that there are so many aspects to take in beyond Peele’s indictment of spectacle, the Hollywood machine, and humanity’s hubris.

From small moments of foreshadowing plot revelations and references to his prior movies and even some of the ones that influenced Nope itself, there are lots of Easter eggs nestled throughout the horror movie, but like OJ and the strange cloud, fans have to know where to look.

At the Star Lasso Experience, Ricky “Jupe” Park can be seen wearing a fancy red suit that echoes a ringmaster’s theatricality. Since he’s promising his audience a spectacle, it only makes sense for him to dress appropriately, though there’s more to his suit than meets the eye.

On the back of his jacket across his shoulders is an embroidered pattern that at first glance might resemble flowers, but on closer inspection is one of the best moments of foreshadowing the final form Jean Jacket takes after appearing as a flying saucer for the majority of the film. As a bonus Easter egg, in the character poster featuring Jupe, his cowboy hat foreshadows is demise as it resembles Jean Jacket sucking him up.

After having known about his extraterrestrial neighbor for months, Jupe hopes to turn the Star Laso Experience into a profitable moneymaker by having guests show up and watch Jean Jacket eat a horse. Jean Jacket normally appears at 6:13 every evening for “dinner”, a specific sequence of numbers that holds eerie significance for the showman.

On the birthday episode of Gordy’s Home!, Gordy the chimp became enraged when a balloon popped exactly 6 minutes and thirteen seconds in,  killing nearly all of his human costars. Two notable Biblical passages, Mathews 3:16 and Romans 3:16 discuss resisting temptation and deliverance from evil, indicating that the promise of fame and the allure of spectacle can make people instruments of greed.

If the opening of Nope seems eerie or strange, that’s because it’s shot through a square-shaped tunnel that has billowing walls, giving a perspective that isn’t confirmed until the end of the movie to be Jean Jacket’s mouth and/or eye.

When the alien transforms into its final form chasing after the balloon from Jupiter’s Claim, a square-shaped green mouth is shown in great detail, which makes a snapping noise, not unlike the shutter on a camera. Given Peele’s horror movies contain social commentary, this aspect of the creature seems to represent humankind’s desire not just to document a spectacle, but to be considered one as well, special enough to be visited by an alien being.

Haywood Hollywood Horses got its start through Alistair Haywood, a fictional name given to the unknown Black jockey filmed on horseback for the first instance of moving pictures. OJ and Emerald have a family business of horse wrangling steeped in not only Hollywood mythos, but the erasure of Black performers.

It’s perhaps fitting that all around the Haywood house are posters of Westerns starring Black cowboys, including several like Buck and the Preacher directed and starring Sidney Poitier, considered by many to be an actor on par with Sir Lawrence Olivier or Marlon Brando in skill and appeal. In a way, the Haywood siblings believe that capturing the “Oprah shot” of Jean Jacket will guarantee that their ancestor’s name, like their own, will be remembered.

Talk of “bad miracles” is frequent in Nope as the sort of terrible things that happen during unexplainable circumstances, such as the Haywood siblings losing their father to an alien regurgitating the inorganic portions of its last meal. When they meet Angel Torres, he more than lives up to his namesake.

Acting as a guardian angel to the brother-sister duo as they attempt to get their “Oprah shot” of the alien, he won’t take no for an answer even when they try to get him to retract his involvement, and even offers them a safe haven when they have nowhere else to go. He’s also the only one with a positive perception of Jean Jacket, hoping the alien will help “save lives” and be a  source of change for the world.

Nope is a bigger feel in scope and visual effects for Peele, so it’s only natural he borrowed some themes (and even scenes) from the well-known blockbuster master, Steven Spielberg. Of Spielberg’s hits, Jaws, Close Encounters of the Third Kind, and Jurassic Park can all be seen clearly as influences on the movie’s tone and narrative.

From cinematographer Holst standing in for shark hunter Quints, willing to do whatever it takes for glory and a chance to do battle with a great predator and the obsession of the Haywood siblings to prove that extraterrestrial life exists, to the hubris of trying to assert dominance on an unpredictable animal, there’s a little bit from each film. Feeding Lucky to the alien at the Star Lasso Experience even echoes trying to appease the T-Rex with a goat, when all the apex predator wants to do is hunt.

A strange sense of fate and destiny provides an undercurrent for some of the characters in Nope, with the throughline of their narrative arc dictated seemingly by chance when in fact there is something more substantial at work. Otis Haywood Sr. sold the horse named Jean Jacket for money rather than letting his daughter Emerald train it, and yet it’s money that is the cause of his unlikely demise.

A single coin took the Haywood patriarch from his children, and a single coin gave Emerald Haywood her “Oprah shot” of the alien Jean Jacket using Jupiter Claim’s Winkin’ Well. The pursuit of riches and the chance to touch greatness kickstarts a self-fulfilling prophecy of avarice.

Denver International Airport is instantly recognizable thanks to Blucifer, a giant rearing blue horse with LED eyes that glow red at night, giving it a demonic appearance. Blucifer strongly resembles the horse mascot at Jupiter’s Claim, right down to the same eyes, and shares a spooky history.

Just like OJ Haywood took over Haywood Hollywood Horses from his father after a falling object killed him, so too did the son of Luis Jimenez have to take over the completion of Blucifer after a piece of the statue fell on top of the sculptor and ended his life.  Ever since its commission, the Denver International Airport has been a source of conspiracy theories involving the Illuminati, subterranean lizard people, and even aliens.

There are several blink-and-you’ll-miss them Easter eggs referencing Peele’s previous horror movie Us, such as the familiar shape of the fabric scissors in Jupe’s office and the license plate on Angel’s van that reads “1111”, a reference to Jeremiah 11:11 featured as a reoccurring theme.

These references even suggest that Peele could be making a shared horror universe, with the narratives of his films all taking place within the same narrative plane, perhaps even known to other characters. Putting details from his previous films in future endeavors certainly makes for an enjoyable game for his eagle-eyed fans, as well as wondering which characters in Nope would survive the events of Us.

The costumes in Nope are important because they signify different aspects of each character; OJ wears a mixture of urban LA street style and typical ranch wear, including crew shirts from things Haywood Hollywood Horses might have worked on, like The Scorpion King hoodie from the first set his father ever took him on.

Both siblings wear t-shirts featuring Black celebrities, including Michael Jordan and Prince, but at one point Emerald wears a Jesus Lizard band t-shirt and OJ wears one featuring Rage Against The Machine. According to an interview for Consequence by costume designer Alex Bovaird, they’re the bands Angel would have listened to when he was going through the breakup with his girlfriend, and he let them borrow his clothing when he offered them shelter at his house.

NEXT: The 10 Best Psychological Thrillers On Amazon Prime Video

Jordan Peele’s latest horror movie is full of hidden details and Easter eggs that add to the suspense of extraterrestrials terrorizing a family ranch.