OnePlus 10T Vs. Pixel 6: Which Phone Is The Better Buy? 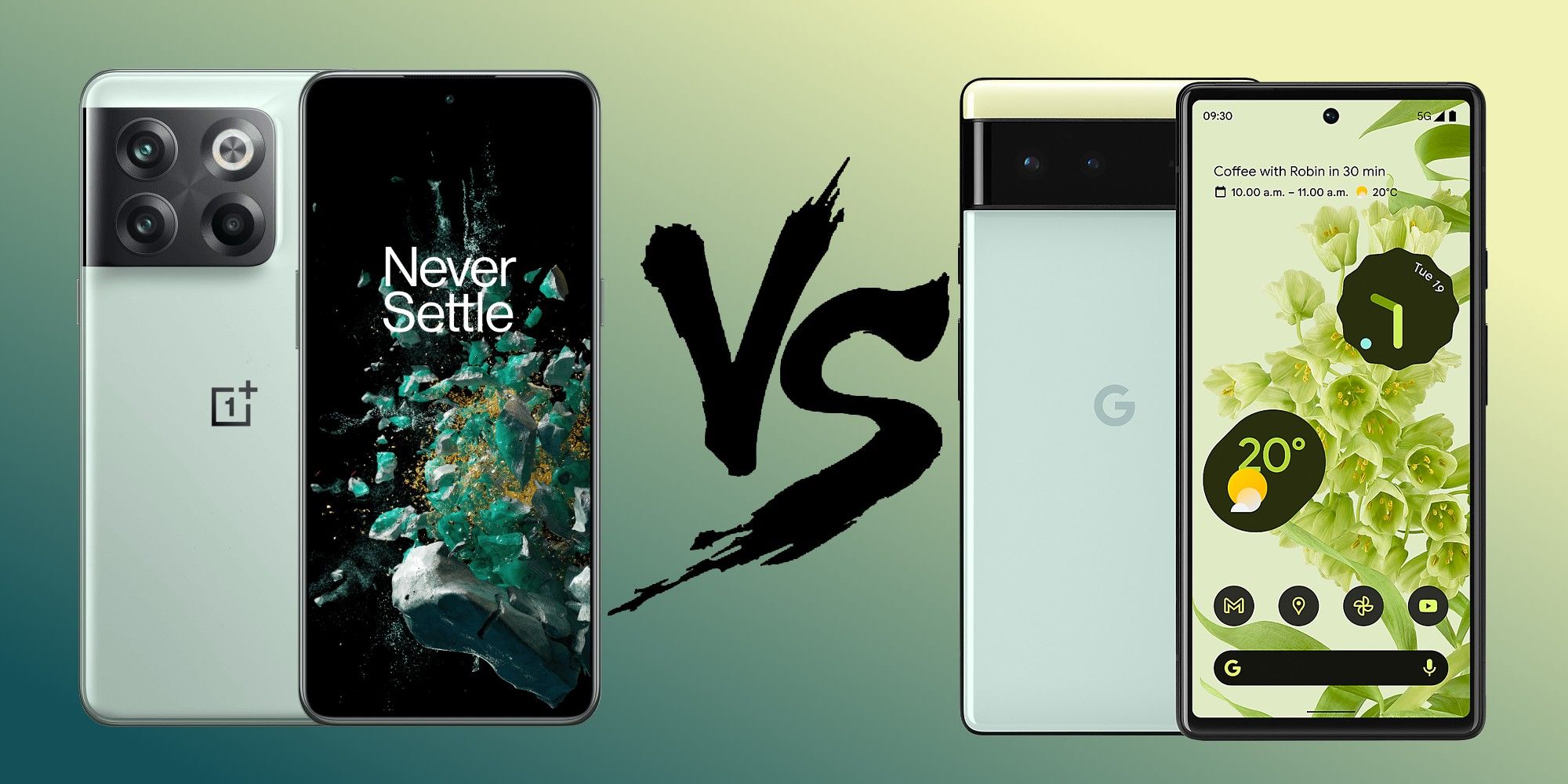 OnePlus 10T Vs. Pixel 6: Which Phone Is The Better Buy?

The OnePlus 10T will be on the radar of a lot of folks looking to pick up an inexpensive Android flagship smartphone but another device that’s worth considering is the Pixel 6. The OnePlus 10T is a cheaper but more powerful version of the OnePlus 10 Pro, and OnePlus has gotten a number of things right with its new phone while making a few expected compromises.

On the other hand, the Pixel 6 is nearing its first anniversary and will soon be succeeded by the Pixel 7, but that doesn’t mean it should be overlooked, especially for anyone who doesn’t want to wait a few months for the next Pixel smartphones to arrive. Plus, the Pixel 6 has been discounted several times recently, making it a great deal for anyone who can get it at a lower price.

RELATED: OnePlus 10T Vs. OnePlus 10 Pro: Which Should You Buy?

The Pixel 6 owes its unique appearance to the camera bar that runs horizontally across its back while the OnePlus 10T‘s stovetop camera housing is a fresh take in terms of design. Both phones have a flat display with a centered punch hole, but the Pixel 6 owes its better build quality to its metal frame, Gorilla Glass Victus-protected display, Gorilla Glass 6 back, and IP68 dust and water resistance rating. In contrast, the OnePlus 10T has a plastic frame, Gorilla Glass 5 on the front and back, and a lower IP54 rating. The Pixel 6 is available to buy in Sorta Seafoam, Kinda Coral, and Stormy Black colors, while the OnePlus 10T can be picked up in Moonstone Black and Jade Green.

The OnePlus 10T towers above the Pixel 6 with its 6.7-inch FHD+ AMOLED display. The screen has a 120Hz adaptive refresh rate, HDR10+, and 10-bit color. On the other hand, the Pixel 6 has a smaller 6.4-inch FHD+ OLED screen with a 90Hz refresh rate and HDR support. OnePlus’s new smartphone has Qualcomm’s most powerful chip, the Snapdragon 8+ Gen 1 processor, under its hood. It is paired with up to 16GB of RAM and 256GB of storage. The Pixel 6’s Tensor chip is no match for the Snapdragon silicon and comes with 8GB of RAM and 128GB or 256GB of storage.

In terms of camera specs, the Pixel 6 has a 50MP main camera with OIS paired with a 12MP ultra-wide camera. It also has an 8MP front-facing camera. OnePlus has also equipped its phone with a 50MP main rear camera, an 8MP ultra-wide camera, and a 2MP macro camera. Sitting inside the punch hole in the display is a 16MP camera. The Pixel 6 Pro is one of the best camera smartphones thanks to Google’s incredible software and the OnePlus 10T will have a hard time defeating it. Both phones have an in-display fingerprint scanner, NFC, Bluetooth 5.2, Wi-Fi 6E, and stereo speakers, but are missing a headphone jack.

The OnePlus 10T packs a 4,800mAh battery with support for an impressive 125W fast charging that allows for a full charge in just 20 minutes. OnePlus also ships the phone with a 160W power adapter. In contrast, the Pixel 6 has a smaller 4,614mAh battery and charges only at 30W. The Pixel 6 doesn’t come with a charger in the box but has an advantage thanks to wireless charging (21W) and reverse wireless charging support. The two phones run Android 12 out of the box but the experience is different as the OnePlus 10T has a custom skin (OxygenOS 12) on top while Google’s smartphone runs stock Android with multiple exclusive features not available on other Android smartphones. The OnePlus 10T will receive three years of OS upgrades starting with OxygenOS 13 based on Android 13. It will also receive four years of security updates. This is a step behind the Pixel 6’s three years of OS upgrades and five years of security updates.

The Pixel 6 starts at $599 for the base model with 128GB of storage and $699 for the 256GB version. That’s a lower price tag than the OnePlus 10T’s base model of the same configuration which costs $649, while the 16GB+256GB variant goes up to $749. Those who want a slightly smaller phone, timely updates, and best-in-class cameras will find the Pixel 6 suits them better. However, the OnePlus 10T justifies its price with its higher refresh rate, more powerful chipset, bigger battery, and much faster charging.

NEXT: Pixel 6a Vs. Pixel 6 Pro: What You Get For Half The Price

The OnePlus 10T has a lot to offer including a powerful chipset and 125W fast charging, but is it worth buying over the Google Pixel 6?