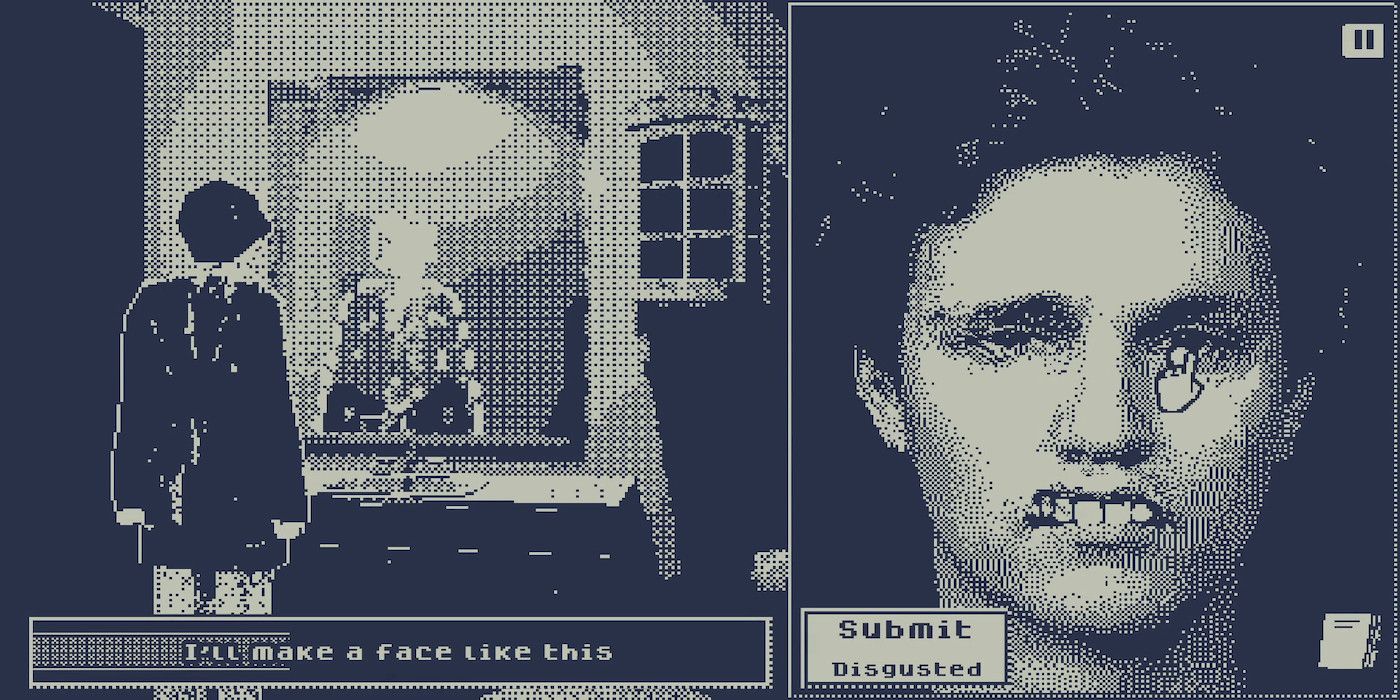 Towards the end of this year, both Oxenfree II: Lost Signals and Stasis: Bone Totem, which are sequels to critically acclaimed point-and-click horror games, are planned to be finally released. Along with brand new upcoming games such as The Excavation of Hob’s Barrow, these titles prove that now is the perfect time to explore this specific horror subgenre.

Although point-and-click adventure games haven’t been able to reclaim the immense popularity the genre had in the ’90s, certain modern horror games, such as Detention, have shown that the gameplay style can still provide excellent immersive experiences.

Created by indie developer Garage Heathen, who also developed Your Amazing T-gotchi, Who’s Lila? is a reverse-detective horror game that was released towards the beginning of this year. Inspired by Twin Peaks, the game follows a student named William “Will” Clarke, who was the last person to see a local woman named Tanya Kennedy before her mysterious disappearance.

RELATED: 10 Best Games Whose Meaning Is Left Up To Interpretation

Besides the pixelated monochromatic retro art-style, Who’s Lila? is also unique because the player must control Will’s expressions by manipulating his facial muscles, which will directly determine how conversations develop and which endings the player achieves. As the player explores this world, they’ll slowly uncover the truths behind what happened to Tanya, how Will is connected to it, and, of course, who’s Lila.

Another example that’s inspired by the works of David Lynch is the ongoing horror puzzle video game franchise known as the Cube Escape or Rusty Lake series. Originally released as a series of escape-the-room Flash games, the franchise now contains 15 installments and primarily follows a detective named Dale Vandermeer as he investigates the death of a woman named Laura Vanderboom.

As the non-linear story progresses, the player slowly discovers how her death is tied to mysterious black and white cubes, and their connection to a location known as Rusty Lake. With the newest entry, simply titled The Past Within, scheduled to release in the Fall, now is the perfect time to get into this intriguing series, which even includes a short official film titled Paradox – A Rusty Lake Film that’s based on the 2018 game Cube Escape: Paradox.

Released in 2017, Lydia is a short atmospheric adventure game whose horror likely hits close to home for some players. Following the titular Lydia, who begins the game as a young girl, the player controls her as she grows up in a terrifying environment filled with substance abuse. After her parents force Lydia to go to bed early so that they can have their parties, Lydia’s best friend, Teddy, brings her into another world through her closet.

As she explores this new world, she slowly works through her traumas and uncovers the truth behind what the “monster” is. With gorgeously somber storybook-esque graphics, Lydia delivers an impactful horror experience by focusing on realistic struggles that sadly many children face such as abusive parents and alcoholism.

Created by Desert Fox, who would later develop the 2021 horror game Darkness Under My Bed (one of the best horror games with creepy dolls), the Bad Dream franchise is a series of hand-drawn surreal horror games where the protagonist must solve puzzles to escape from their dreams. Although the six original games in the series were originally released as standalone Flash games, the 2017 game Bad Dream: Coma delivered a full narrative experience that tied all the previous titles together.

Because Death has abandoned the dreamworld, the inhabitants are suffering and the protagonist must decide their fates, for better or worse, with the help of a mysterious masked man. In 2018, another installment titled Bad Dream: Fever was released where the player must help a masked girl solve a strange blue ink plague.

Inspired by the works of Edgar Allan Poe and H. P. Lovecraft, The Last Door is an episodic horror series that’s set within Victorian England and consists of eight episodes. During the first four episodes, that make up the game’s first season, the player controls a young man named Jeremiah Devitt who must investigate a supernatural place known as the Veil in order to solve the death of his old academy friend Anthony Beechworth.

In the second season, the player instead controls Devitt’s former psychiatrist Doctor John Wakefield as he tries to uncover the mysterious circumstances surrounding Devitt and his friends. With the beautiful pixel-art creating a vague atmosphere and the excellently creepy sound design, The Last Door is possibly one of the most accurate adaptations of Poe and Lovecraftian horror.

Since the sequel Stasis: Bone Totem is planned to be released at the end of this year, now is the perfect time to play the original 2015 isometric science fiction adventure game Stasis. Wanting to start a new life on Titan, which is one of Saturn’s moons, the main character, John Maracheck, and his wife and daughter are put into stasis. When he awakens, however, he finds himself on the seemingly abandoned spaceship Groomlake.

As he tries to find his wife and daughter, he slowly uncovers the horrifying secrets behind the ship’s wrecked hallways and bloodied floors. Even if the player is not a fan of isometric games, the beautifully detailed environments and engaging narrative make this game a worthwhile experience.

Released in 2012, The Cat Lady is a side-scrolling psychological horror adventure game, and is also one of the many great games that discuss mental health. Created as the second entry in the Devil Came Through Here trilogy, which includes the 2009 game Downfall and the 2019 game Lorelai, The Cat Lady follows a middle aged woman named Susan Ashworth who struggles with chronic depression and only has stray cats as companions.

When she tries to end her life, she instead finds herself in a surreal realm where she meets the Queen of Maggots, who makes Susan immortal and tasks her with killing five “parasites.” Although the game is filled with dark and violent imagery, it does realistically portray depression, and it also has unique collage-like art-style.

Set during the 1960s when Taiwan was under martial law by the Kuomintang (KMT), Detention is a 2017 side-scrolling psychological survival horror game that centers around two high school students named Wei Chung Ting and Fang Ray Shin. When the two characters wake up, they discover that a typhoon has hit the area and they’re now trapped in the school.

But, this natural disaster turns out to be the least of their problems when Ray later wakes up again only to find Wei already dead, the school twisted into a nightmarish form, and ghosts patrolling the halls. As the player explores the world, solves puzzles, and avoids monsters, they slowly uncover the dark history behind Ray, Wei, and the rest of the school.

Primarily taking place in 19th century Sweden, Year Walk is a 2013 adventure game where the protagonist, a man named Daniel Svensson, decides to do an ancient Swedish tradition known as “Årsgång” or “Year Walk” in order to see his future with his lover, Stina. To do this, he will have to solve various puzzles and encounter supernatural creatures within the snow-covered forest.

But, there’s a reason why year walking is considered dangerous, and every gift comes with a price. Meanwhile, in the present day, a folklorist named Theodor Almsten uncovers Daniel’s past actions and tries to stop him from meeting his terrible fate, which the player experiences by reading his journal entries.

Inspired by iconic teen coming-of-age films and shows, Oxenfree is a 2016 2.5D supernatural thriller adventure game where the player controls a teenage girl named Alex who brings her new stepbrother, Jonas, and her friend, Ren, to Edwards Island for a weekend beach party. After meeting up with Clarissa’s best friend Nona and his dead brother’s ex-girlfriend Clarissa, Alex accidentally opens up a dimensional rift by tuning an old radio in a cave on the island.

With supernatural events occurring and time seemingly unraveling around them, Alex must try to help the group escape the island while uncovering its dark history. Depending on how the player responds to the characters in real time, there are multiple possible endings. A sequel set five years later titled Oxenfree II: Lost Signals is scheduled to release this year.

Some modern games, such as the Lynchian Who’s Lila? or the award-winning Oxenfree, prove that the point-and-click genre can work well with horror.