Top 10 Times Lightsabers Appeared In Movies Other Than Star Wars 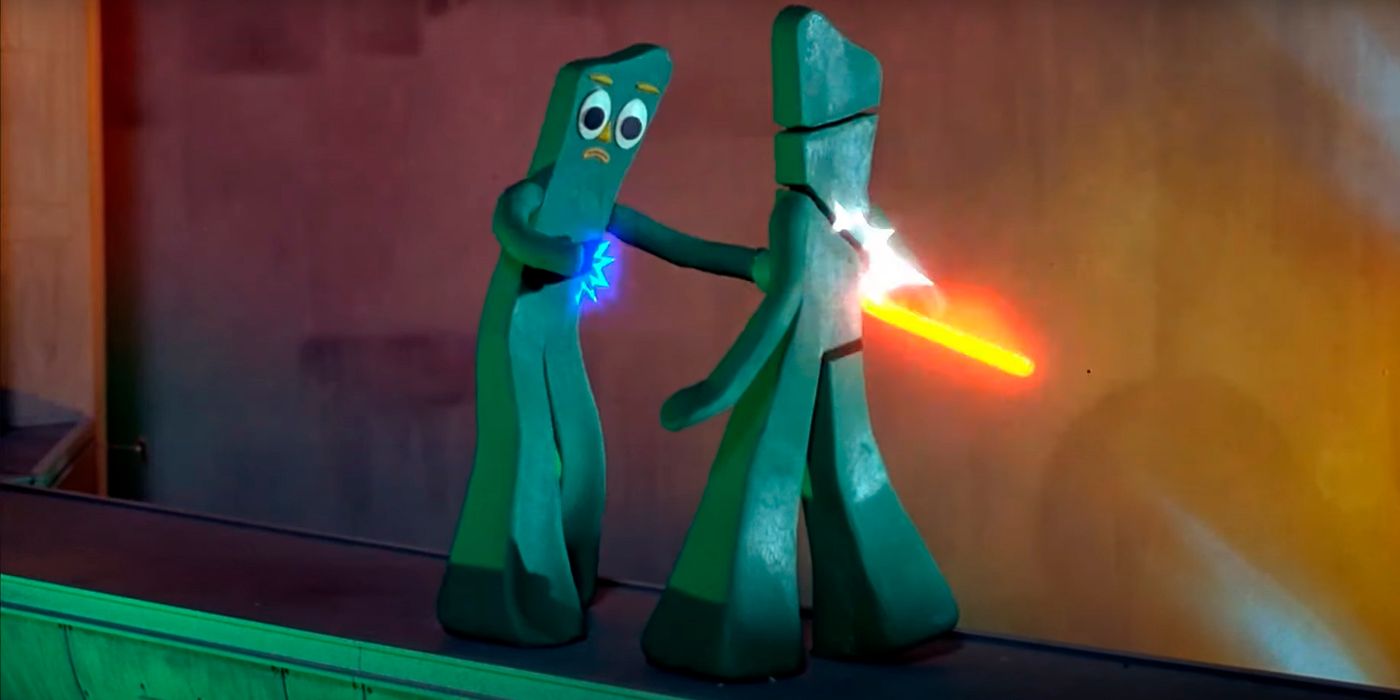 Top 10 Times Lightsabers Appeared In Movies Other Than Star Wars

If the duels between Kenobi and Vader seen in Obi-Wan Kenobi are any indication, lightsabers aren’t going anywhere anytime soon. Ever since they debuted in 1977’s Star Wars, they have appeared in just about every Star Wars property. But it isn’t just Star Wars filmmakers who put them in their movies.

Numerous other films have included lightsabers for comedic purposes or for the sake of pure awesomeness. In many cases, the scenes in question directly reference the iconic duels and banter of Star Wars to hilarious results.

In 1995, the clay-animation franchise Gumby was brought to the big screen. In one scene, Gumby is chased through numerous settings by an evil robot version of himself. With the robot using a sword, Gumby manages to find an orange-bladed lightsaber.

The scene soon escalates to a full-on parody of the Empire Strikes Back lightsaber duel. In Star Wars tradition, Gumby cuts off the robot’s hand with the saber. Soon the clone picks up a lightsaber of his own and the two spar in a series of shots that are staged identically to shots from The Empire Strikes Back. Gumby loses the fight and is diced up, but due to his distinct clay properties, he’s back to his old self in no time.

The hilarious Steve Coogan starred in this 2008 comedy about a high-school drama teacher who creates and stages an absurd sequel to Hamlet. The over-the-top play involves Hamlet and Jesus teaming up in a time-traveling quest.

Swords obviously wouldn’t cut it in a story like that so all potential swords would instead be replica lightsabers. Hamlet and Laertes engage in a lightsaber duel that takes place both on the stage itself and high above with both actors suspended by a moving rig.

The Charlie Sheen starring Hots Shots! films of the early ’90s parodied iconic ’80s blockbusters like Rambo and Top Gun. During the climax of the second film, the President of the United States and Saddam Hussein square off in numerous over-the-top scenarios. At one point, they each grab fire pokers and ignite them like lightsabers.

What makes the scene so great is just how over-the-top the concept is. Both characters spew iconic Star Wars lightsaber dialogue as they spar and Saddam even speaks deeply like Darth Vader, up until the point he remembers to use his inhaler. While delivering a series of strikes, the U.S. President hilariously declares “first guy to die loses.”

After Matthew Perry turns into his 17-year-old self, played by Zac Efron, his startled best friend Ned wakes up from his landspeeder bed fearing a robber. Ned dons a spartan helmet and uses numerous medieval weapons to fight back the would-be thief. Soon the battle takes on a Star Wars color as both characters ignite lightsaber replicas.

The scene is surprisingly well choreographed for such a funny concept and ends up being a pretty engaging fight. The cinematography and pacing of the fight are constructed with the care a lightsaber fight deserves. And the funny banter between the characters favors cleverness over cliché.

After discovering that his cupboard has the ability to turn action figures to life, young Omri does what all boys in his situation would do. He loads the cupboard up with action figures and lets them spar it out! And what better character to bring to life than Darth Vader himself.

The scene is very brief, but a hilarious and thrilling moment to see in a feature film. Darth Vader ignites his lightsaber and takes on the famous Tyrannosaurus Rex, Rexy, from Jurassic Park. Both characters lunge at each other but no lightsaber contact is actually made. Unfortunately, Omri turns the characters back into figures before they could get into some traditional Star Wars dismemberment action.

After the release of Star Wars in 1977, fans wouldn’t have to wait long to see a lightsaber on screen again. Dozens of knock-off films were put into production with the hopes of cashing in on the success of George Lucas’s blockbuster. And 1978’s Starcrash featured a green lightsaber used by Akton and Prince Simon, played by Marjoe Gortner and David Hasselhoff.

The laser sword is used in a fast-paced and thrilling fight. When the main characters are approached by sword-wielding stop-motion robots, Akton pulls out his saber and fights back. The laser sword is more lightweight than a Star Wars lightsaber and gives the scene the feel of fast-paced fencing. Upon Akton’s defeat, The Hoff picks up the sword and continues the fight. Yes, David Hasselhoff used a green lightsaber before Luke Skywalker.

If you don’t know about Bibleman, you are suffering from a deficiency of campy lightsaber-wielding superheroes in your life. Surprisingly, such a franchise has been running strong for upwards of a quarter century! The original Bibleman program launched in 1995 as a direct-to-video live-action series whose titular hero pulled his power from God and the scriptures.

RELATED: 10 Star Wars Characters That Appeared In Other Movies & Shows

The hilarious concept of a lightsaber-wielding Christian superhero is so bad it’s great. The saber is in fact not a lightsaber but the power of the holy spirit and the duels range from bizarre awkward moments to genuinely thrilling ones. Some YouTubers such as Wheat Men have even edited in Star Wars music to the scenes, with one such video hilariously titled Duel of the Faiths.

With some recent films exploring the theme of virtual realities where gamers could use famous pop-culture items, it was inevitable that lightsabers would pop into such movies. Ready Player One had several Star Wars references but surprisingly omitted the lightsaber. Instead, it was the Ryan Reynolds film Free Guy that took the glory.

As Ryan Reynolds battles super-buff Ryan Reynolds, he cycles through numerous iconic weapons including Captain America’s shield and Hulk’s fist before igniting a blue lightsaber to the roar of John Williams’s Star Wars theme. It’s a stand-out moment with the lightsaber getting the emphasis it deserves as numerous on-lookers react in awe.

There’s no doubt that Mel Brooks is one of the kings of parody. With hits like Blazing Saddles and Young Frankenstein, no genre was safe from his spoofing. His 1987 hit Spaceballs is arguably the most famous and best Star Wars parody film out there.

The climactic clash between Lone Starr and Dark Helmet is a perfect parody of the iconic duels of Star Wars. Darth Vader’s most iconic lines are lampooned as “At last we meet for the first time for the last time” and “I am your father’s brother’s nephew’s cousin’s former roommate.” The characters also ignite their “lightsaber” rings from their crotches, leading to the hilarious line “I see your schwartz is as big as mine.”

The films of Kevin Smith’s View Askewniverse are frequently populated with Star Wars jokes and references. And none more so than 2001’s appropriately named Jay and Silent Bob Strike Back. The duo’s journey to disrupt production of a Bluntman and Chronic film leads to arguably the definitive lightsaber parody scene.

What really makes this scene stand out is the real-life connections to Star Wars. After switching with the actors of the film-within-the-film they find themselves up against Luke Skywalker himself, Mark Hamill, who ignites a dildo-lightsaber and refers to himself as Jedi Master. They fight back with bong lightsabers and the director played by Chris Rock comments that George Lucas is going to sue somebody. Best of all, Mark Hamill loses a hand and says “Not again.”

NEXT: Top 10 Times Characters From Different Franchises Faced Off On Screen

Filmmakers have often tried to get lightsabers into their movies, even if they aren’t Star Wars. Sometimes it’s an homage and sometimes it’s parody.