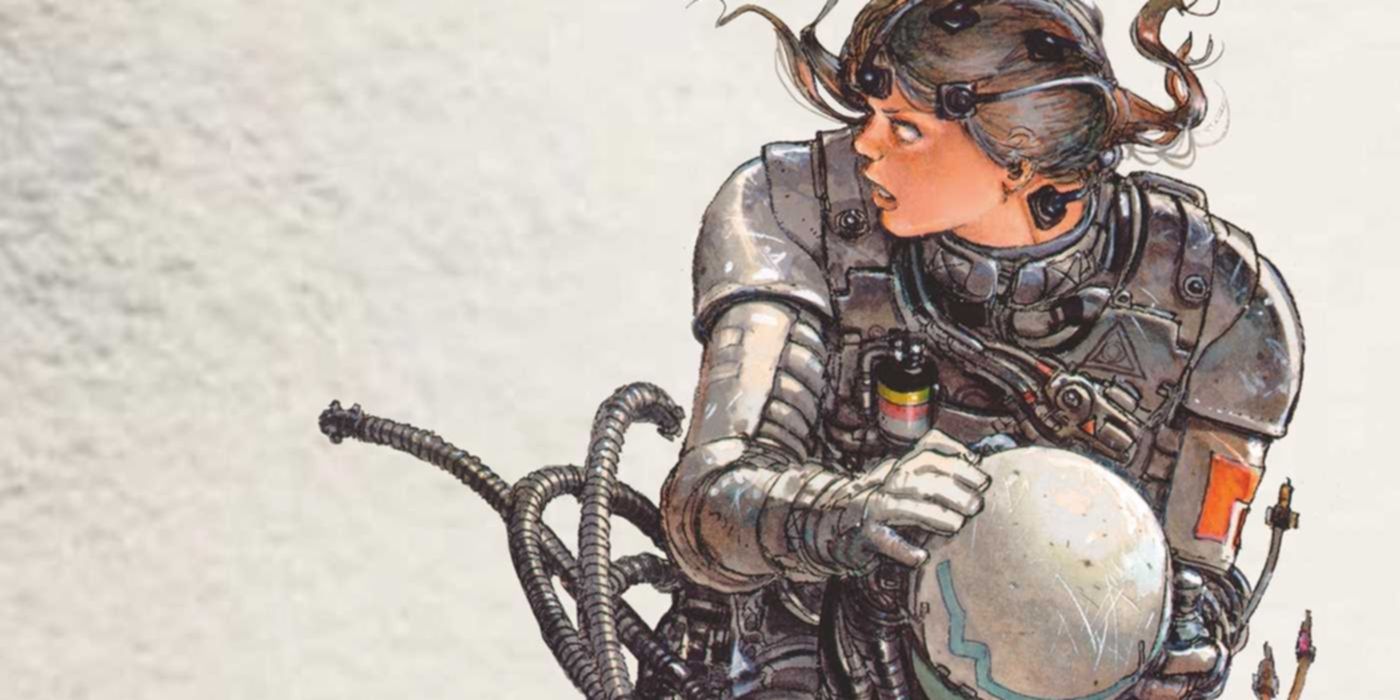 Screen Rant is proud to reveal an exclusive preview of Humanoids’ upcoming release, The Deluxe Giménez, as well as a heartwarming intro from Bill Sienkiewicz to his artistic inspiration, Juan Giménez.

The world lost a veritable comic book icon on April 2, 2020 when Argentine comic creator Juan Giménez passed away from COVID-19. Giménez had a career spanning decades and his work was known all the world over for its rich details and grand atmospheres. One of his most notable works was The Metabarons, a grand space opera spinning off of the beloved science fiction series, The Incal. Giménez worked with Alejandro Jodorowsky to bring The Metabarons to life, with many praising Giménez’s intricate art. Giménez also pulled double duty as writer and illustrator for several stories such as Moi, Dragon, Leo Roa, The Starr Conspiracy, and The Fourth Power.

Humanoids has announced that The Starr Conspiracy and The Fourth Power would be released in one large volume known as The Deluxe Giménez and Screen Rant is excited to show off several pages of The Starr Conspiracy. Beings from all over the galaxy are heading to Antiplona, a planetoid filled with gambling, while one visitor seems to have deadly plans in mind. Screen Rant also has an exclusive preview of The Deluxe Giménez‘s intro, penned by comic illustrator Bill Sienkiewicz. Sienkiewicz’s intro serves as a tribute to an artist who inspired him and is a testament to the creative imagination Giménez brought to the world through his work. Read on for The Starr Conspiracy’s preview and Bill Sienkiewicz’s touching words.

I first became aware of Juan Giménez’s art in the 1970s in Heavy Metal magazine, the Americanized version of the great European science fiction/fantasy comics anthology magazine Metal Hurlant. I was a devoted comics fan, a teenager about to enter art school to follow my dream of drawing comics as a career, but my exposure to the variety of styles and storytelling possibilities from the global artistic community was nonexistent. My knowledge of comics in general was limited to what I saw in the USA. (Obviously, this was in the dark days—pre-Internet.)

Heavy Metal (and, later, other magazines like L’Eternauta) impacted me immediately and profoundly. The range of artistic styles blew me away. Mœbius, Druillet, Bilal, Jodorowsky, Crepax, Manara; the list of talent who still continue to inspire awe and respect is endless.

Still, for me, one artist stood out. Juan Giménez, even then—and this was before I became aware of his amazing series The Metabarons (written by the ever-iconoclastic Alejandro Jodorowsky.)

Giménez’s work was gorgeous, well-drawn, and fantastical, as was that of other European artists, but unlike so many of his peers, whose work could feel surreal and trippy, expressive and abstract, Giménez’s work had a profound weight to it, a palpable reality and otherworldliness. His tales felt wholly inhabited, his characters all sharing in a very particular history regardless of whatever milieu Juan thrust them into. That became my reality as a reader.

There was the sense of scale, of size, to the designs of the clothing, weapons, vehicles, and buildings. Humans appeared engulfed and dwarfed by the world, and there seemed to be inescapable consequences endured as a result of the functionality of his designs.

It was the storytelling brilliance of—and a prime example of—cause and effect. Physics. It all impacted me on a very subconscious level. His work didn’t dazzle me with technique, though it had plenty of that. It just felt lived in, simultaneously brand new and yet somehow exceedingly familiar. It made sense in a way that dreams make sense. And even when one wakes up from that dream, the truth of it seems to linger and continue to bear down.

Simply, Juan’s work was proto-steampunk. It existed decades before there was a cool name or a cosplay category for what he conjured.

I’m sure, as their creator, he inhabited his worlds. He had to have done so. He had to have kicked the tires, walked miles in the boots of the characters, found exquisite reason (or not, because why not) for the strange headdresses and weaponry he concocted, and enjoyed teasing us with the runes and ornate symbols he carved into the functional behemoths he called armor.

Talk about inspiring. Talk about transporting the reader to a strange new world. What a creator he was.

And I don’t have enough words to express my thanks and appreciation.

Sienkiewicz’s intro really says it all about how much of an impact Giménez had on the world. Readers can see everything the artist was referring to in the preview for The Starr Conspiracy. The masterful work, the gorgeous environments, a sense of knowing the world in and out. Sienkiewicz is right on the money in regards to why Juan Giménez was such a lauded creator.

The upcoming release from Humanoids is a chance to bring Giménez’s work to a larger audience. Anyone checking out The Deluxe Giménez who has never experienced his work before may find themselves agreeing with Sienkiewicz’s moving intro. They may even feel similarly inspired by the bold visions Giménez helped realize through his art. Readers touched by Bill Sienkiewicz’s letter and intrigued by the preview for The Starr Conspiracy should keep a look out for when The Deluxe Giménez is released.

The Deluxe Giménez is available in stores July 12th, 2022.

Screen Rant has an exclusive preview of The Deluxe Giménez, with preview pages from “The Starr Conspiracy” and a touching intro from Bill Sienkiewicz.