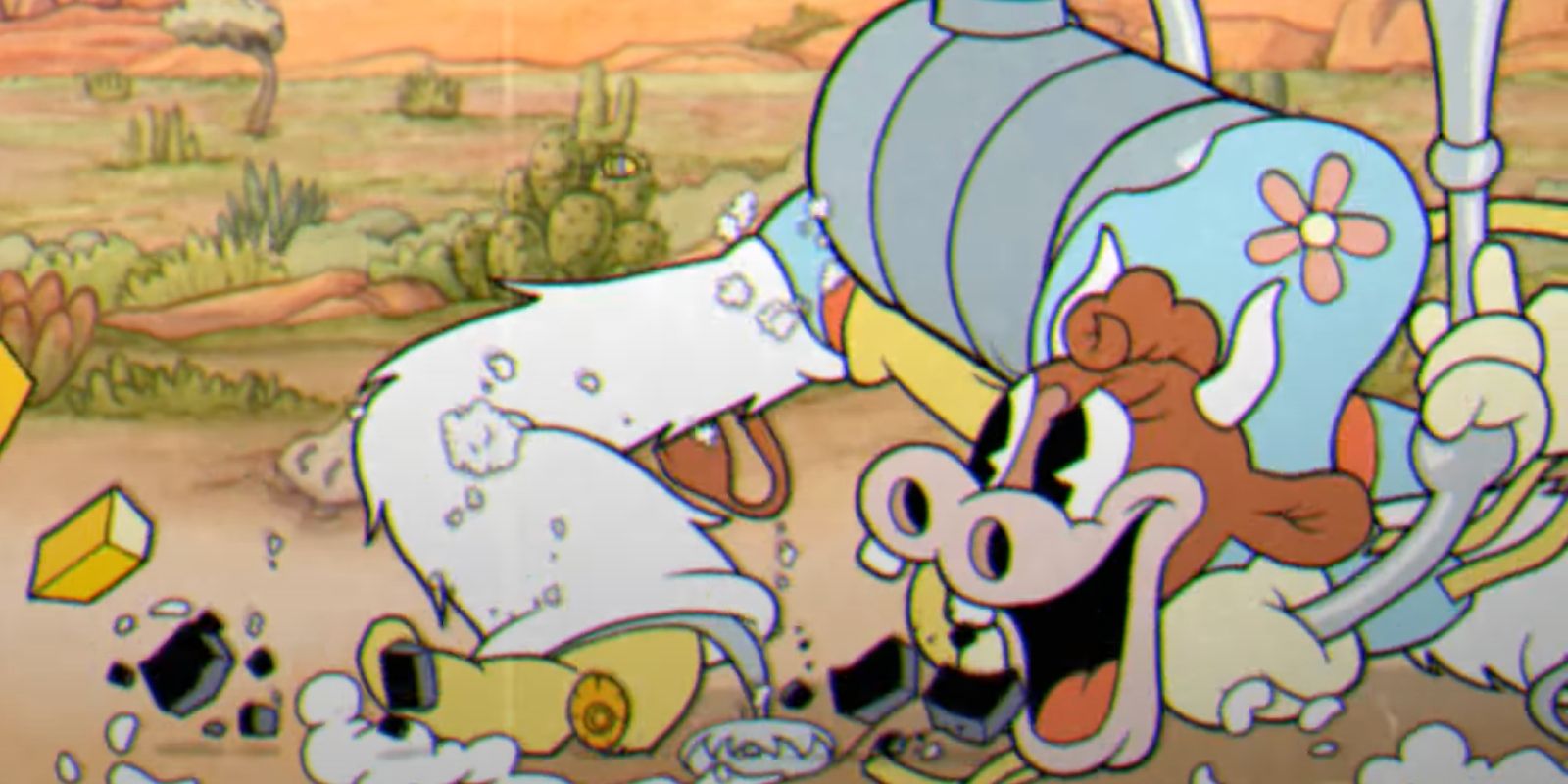 The Esther Winchester boss fight in Cuphead: The Delicious Last Course can be unlocked after defeating the Moonshine Mob, and there are four phases to conquer in order to get a knockout. The Moonshine Mob is located in the southern part of Island IV, so players can head that way to unlock Esther Winchester. The High-Noon Hoopla fight is the only new boss battle where players are in a plane. Each phase of the fight against Esther Winchester is presents unique challenges, so learning the different attacks and how to avoid them is vital.

Since weapons don’t apply to aerial boss battles, it’s recommended that players use either Cuphead or Mugman in order to equip a charm that affects the fight. If players use Ms. Chalice, they need to use the Astral Cookie charm, which eliminates other options. Instead, using a different character will allow players to equip a useful charm, such as the new Heart Ring charm, which can be purchased with the hidden coins on Island IV in Cuphead: DLC. The Heart Ring charm grants a health point on the first, third, and sixth parry performed successfully during a fight.

Related: Which Classic Cartoons Cuphead Was Inspired By

Unlike the secret boss that’s unlocked by solving the tombstone puzzle, the Esther Winchester fight has multiple phases. During each phase of the boss fight, players can shrink their plane to avoid projectiles, but the damage dealt to the boss will be greatly reduced. The third phase is arguably the most difficult because the projectiles cover a large portion of the screen, so it’s recommended that players have their super attack ready for that section. Alternatively, if players aren’t having trouble with phase three, the special ability can be saved for the final phase to get a knockout quickly.

The first phase of the fight has a few different projectiles to avoid, and the boss will switch between the top and bottom portions of the screen. For the main attack in this part of the difficult boss fight, Esther will shoot snake oil globs, but they only reach about halfway across the screen. However, the actual snakes made of oil will always come in pairs with a gap in between them, and they will cross the length of the arena. Esther will also grab a lasso and pull a cactus across the top or bottom of the screen depending on which floor of the house they’re poking out of.

There’s a bird in this phase that drops TNT, which splits into four and then two projectiles for a total of six bombs. To avoid the TNT, players can stay close to the ground because they only shoot upward and start fanning out about a fourth of the way up the screen. The last attack in phase one comes from a flying creature that shoots a spike ball when it gets to the left edge of the arena. Players can shoot the creature when it first appears to eliminate the spike ball completely. However, the spike balls are the only objects that allow players can use one of the best skills, parrying, so players can also let the creature shoot to start charging up their super attack. Players should continuously shoot and shrink when necessary to avoid getting hit. The first phase will be over when Esther breaks out of the house and holds a vacuum.

In the second phase, there are only two attacks to avoid. First, Esther will use the vacuum to suck in bags of money, coins, gold, and stacks of cash. There will be more objects to avoid the longer Esther is gathering them, so shrinking may be necessary toward the end of this attack. After collecting enough wealth, Esther will shoot bulky safes that explode into more coins, bags, gold, and cash.

Related: Will There Be A Cuphead 2?

Both attacks in this phase are essentially the same, except if players get too close to the boss when they’re sucking in money, they will also get pulled toward the vacuum. As long as players use their infinite ammo to continuously shoot, this phase of the fight should be over after the second safe launch attack. When phase three starts, Esther will be sucked into the vacuum and an enemy made of sausage links will appear.

Similar to the second phase, the third section of the Esther Winchester boss fight includes two types of attacks. The Acme Bean Cans floating in stationary positions will shoot a line of beans from the open side. The beans can be avoided by moving away from the can’s opening, but it can be difficult to dodge them while watching out for the steaks floating around. The boss will spit out bulky steaks that spin in wide circles as they float across the screen. Some steaks can be parried, so players should take advantage of that whenever possible. It’s much easier to complete this phase by shrinking often, but doing so will increase the time it takes to get to the last section of this boss fight in Cuphead: The Delicious Last Course. Phase three is over when the sausage link character jumps into a tin can.

The final phase of the Esther Winchester boss fight has sausage links coming out of a tin can in a ‘V’ shape. The gap between the links will narrow until they’re almost in a straight line cutting across the middle of the screen, then they’ll move back out to the top and bottom edges. Players will need to fly in between the stringy gaps to go to the top, bottom, or middle of the screen depending on the links’ position. Additionally, there will be peppers that shoot out in a semi-circle, and the gap between them will grow as they move to the left side of the arena. Some of the peppers can be parried to charge up the super ability. If players save their special attack for the final phase, it will only take a few moments to complete the fight and get a knockout. The Esther Winchester boss fight in Cuphead: The Delicious Last Course can be difficult, but as long as players use the shrinking ability strategically and shoot continuously, they should be able to defeat this boss without too much trouble.

Next: Cuphead: Best Things to Do After Beating the Game

Cuphead: The Delicious Last Course is available for PC, Nintendo Switch, Xbox One, and PlayStation 4.

Cuphead: The Delicious Last Course’s Esther Winchester boss fight has four unique and challenging phases that are completed while flying in a plane.