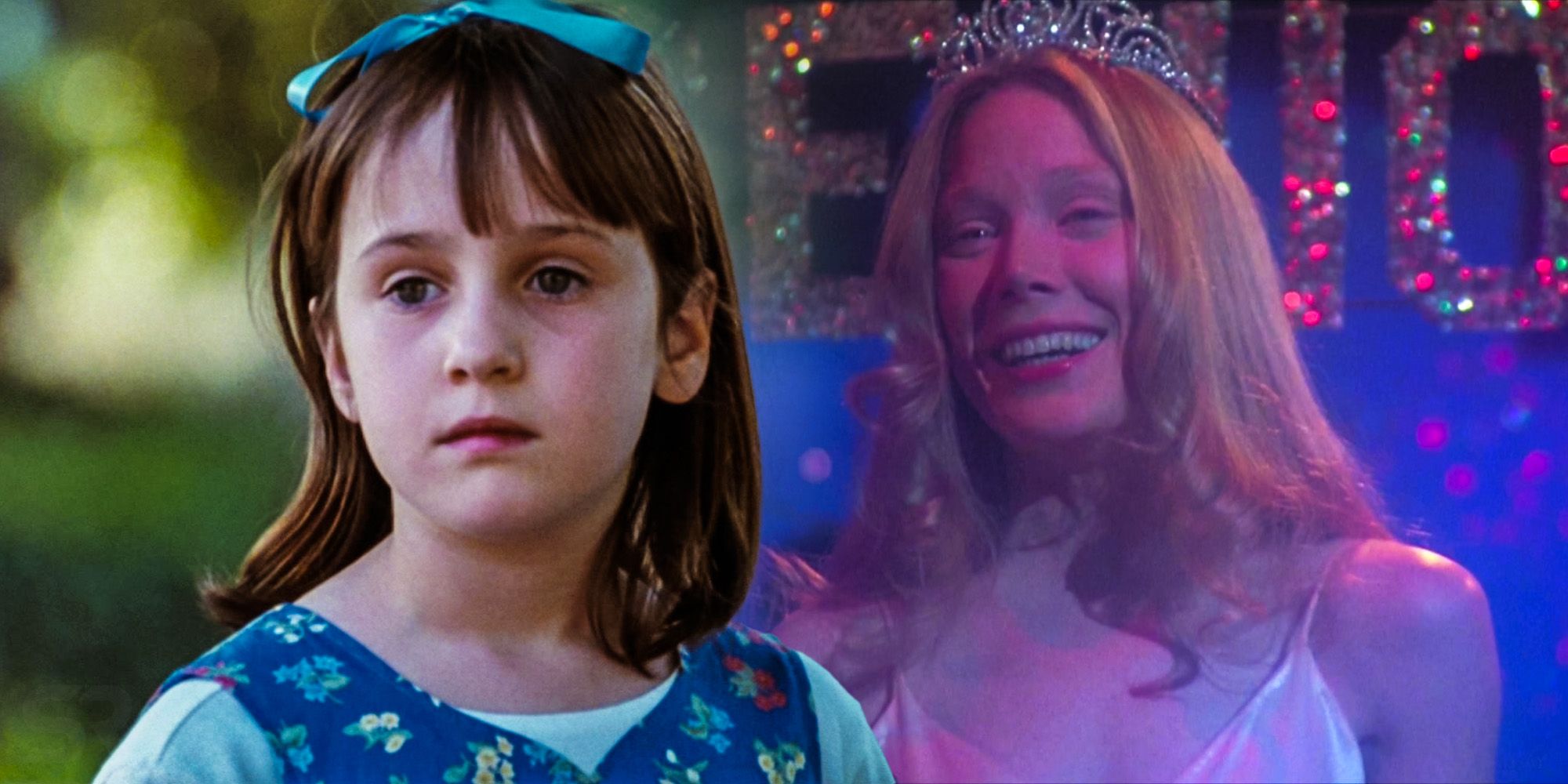 Many of Stephen King’s stories live in the same universe and even reference characters and events from other novels, but over the years, a variety of theories on King’s works have emerged, linking the characters to stories very different from those by King, as is the case of a theory that suggests Carrie White and Roald Dahl’s Matilda Wormwood are the same. Stephen King has earned the title of the King of Horror thanks to his many horror novels and short stories that have terrorized generations of readers while also allowing them to explore a variety of fears, and the book that started it all was Carrie.

Carrie was published in 1974 and it introduced readers to Carrie White, a friendless, bullied high-school girl living with her extremely religious and abusive mother, Margaret White. After a traumatic incident at school that goes too far and tired of the constant abuse she goes through at home as well, Carrie discovers and uses her telekinetic powers to unleash her revenge against those who did her wrong, but she causes mass destruction in the process. Carrie became widely popular after Brian de Palma’s 1976 movie adaptation and it has since been adapted to other media as well, while also being the subject of many theories related to the Stephen King universe, mostly thanks to her powers.

Related: Why Stephen King Disliked Carrie So Much He Threw The Story In The Trash

While it makes sense that Carrie White and the events described in her novel have been used to connect her story to others within King’s universe, there are also other theories that link them to worlds that are very different from King’s, as is the case of a theory that explains Carrie White and Matilda Wormwood, from Roald Dahl’s children’s book Matilda, are the same person.

Matilda Wormwood is the protagonist of Roald Dahl’s 1988 book Matilda, which got a movie adaptation in 1996 directed by Danny DeVito (who also played Matilda’s father, Harry Wormwood) and starring Mara Wilson as the title character. Matilda is set in a small Buckinghamshire village and tells the story of Matilda Wormwood, the daughter of Mr. and Mrs. Wormwood, who turns out to be a genius. Matilda learned to speak when she was one year old and to read when she was three, and by the time she was four, she had read a long list of classic books. Unfortunately, Matilda was ignored and emotionally abused by her parents, who never acknowledged her incredible abilities. With time, Matilda developed telekinesis, which she used to help her teacher, Miss Honey, and her friends at school as they were all emotionally, psychologically, and physically abused by the tyrannical headmistress Agatha Trunchbull. Matilda used her powers to scare Trunchbull enough to have her run away from town, and when the police found out that Mr. Wormwood had been selling stolen cars, Matilda’s parents and her brother, Michael, also escaped, but Matilda asked to live with Miss Honey, and so they finally found their happy ending and formed the loving family neither of them grew up with.

Carrie White is the daughter of Ralph and Margaret White, but Ralph died before Carrie was born, so she was raised by her mentally unstable and religious fanatic mother. Carrie was constantly abused by her mother, who beat her and threw her into a “prayer closet” when she did something Margaret thought was “sinful”. Carrie showed signs of supernatural power from an early age when she unintentionally unleashed a rain of stones after Margaret dragged her into the house when Carrie approached their neighbor, who was sunbathing topless. Carrie’s powers – telekinesis, telepathy, thought projection, and more – grew with time, and they were unleashed on prom day, where she knocked her mother to the floor as she was tired of her constant abuse and she later used them against everyone at prom after she was humiliated by school bully Chris, who dumped a bucket of pig’s blood over her head. Carrie killed several students, teachers, and town residents as she also destroyed streets and buildings, and at the end of Carrie, she also killed her mother and died as a result of a knife wound inflicted by her mother.

Given the similarities between Matilda and Carrie, mostly those related to their powers, a theory suggests Matilda is a prequel story to Carrie. The author of the theory explains that, in order to start a new life far from all those painful memories, Matilda and Miss Honey moved to America, specifically to Chamberlain, Maine, and changed their names to Carrietta and Margaret White. For a while, as they adapted to their new life, Miss Honey/Margaret homeschooled Matilda/Carrie, but trauma quickly caught up with Miss Honey and she became increasingly religious (and dangerous). As Miss Honey projected her new religious beliefs onto her “daughter”, Matilda became shy, insecure, and unassertive, and her powers began to fade (or went dormant). Miss Honey’s extreme beliefs left her mentally unstable and she denied knowing about Matilda’s powers. The rest of the story would have happened as seen in Carrie: Matilda would have reached a boiling point where she channeled all her powers and unleashed them in destructive ways that ultimately led to her and Miss Honey’s death.

Of course, the theory is a big stretch and is seen more as a fun, alternate perspective of both Carrie and Matilda rather than something serious, are there are many details that don’t add up. It’s hard to believe that Matilda, as mature and independent as she had always been, would have put up with such a radical transformation from Miss Honey, especially after everything she had already gone through with her biological family, and even after all the tragedies Miss Honey went through, she wouldn’t have gone through such a drastic change, more so as they both finally had a healthy, loving family. Matilda Wormwood and Carrie White can’t be the same person, but their similarities make them mirror each other, with Carrie being a darker version of Matilda.