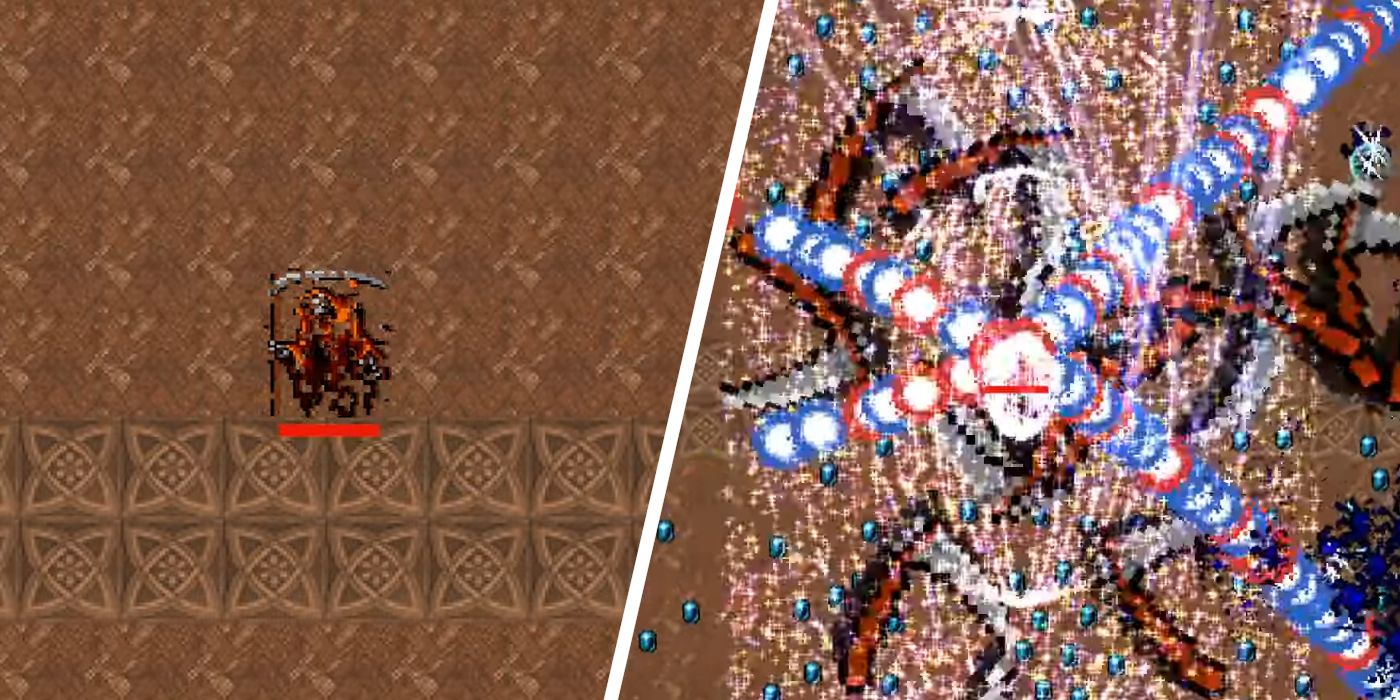 MissingNo, also referred to as “missingNo” and “missingNo,” is a secret playable character in Vampire Survivors that starts every stage with randomized stats and the Axe or Death Spiral as their starting weapon. Needless to say, playing missingNo is quite chaotic, as the character is meant to be a glitch of sorts with its unique starting attribute. Due to the gameplay impracticality and balancing issues of this secret character in Vampire Survivors, the developer decided to remove MissingNo in Patch 0.2.12, replacing them instead with Mask of the Red Death, also known as Red Death.

To unlock Red Death, missingNo’s replacement in Vampire Survivors, players must reach the time limit of a stage, after which a boss enemy called Death will spawn once every minute. The best way to defeat Death is with the Crimson Shroud and the Infinite Corridor, the evolutions of Laurel and Clock Lancet, respectively. These evolutions require that the player reach the Holy Forbidden after killing Moon Trinacria in Moonglow during the Lunar Eclipse. After fans collect the Yellow Sign from the Holy Forbidden, four new items will appear in every stage: Metaglio Left, Metaglio Right, Silver Ring, and Gold Ring.

To acquire the Infinite Corridor weapon in Vampire Survivors, players must evolve the Clock Lancet by improving it to Level 7 with a Level 9 Silver Ring and Level 9 Gold Ring in possession. Likewise, the Crimson Shroud evolution is achieved by leveling the Laurel to 7 and then attaining Level 9 for both Metaglio Left and Metaglio Right. Once players have these two items, they should be able to take down Death with ease to unlock Red Death, missingN▯’s successor in Vampire Survivors.

Naturally, there will still be Vampire Survivors fans who want missingNo in their playable roster. While there’s no official method of unlocking this secret character by using an older build, players can modify their save file by editing the game’s code. However, according to the developer, this act will make them ineligible for technical support or updates in Vampire Survivors.

Nevertheless, here are the steps for changing the game’s files to acquire missingNo:

Next: Vampire Survivors: Where to Unlock the Grim Grimoire

Vampire Survivors is available on PC via Steam.

Replaced by Red Death, MissingNo is a secret character of the past in Vampire Survivors but is still unlockable by modifying the game’s files.