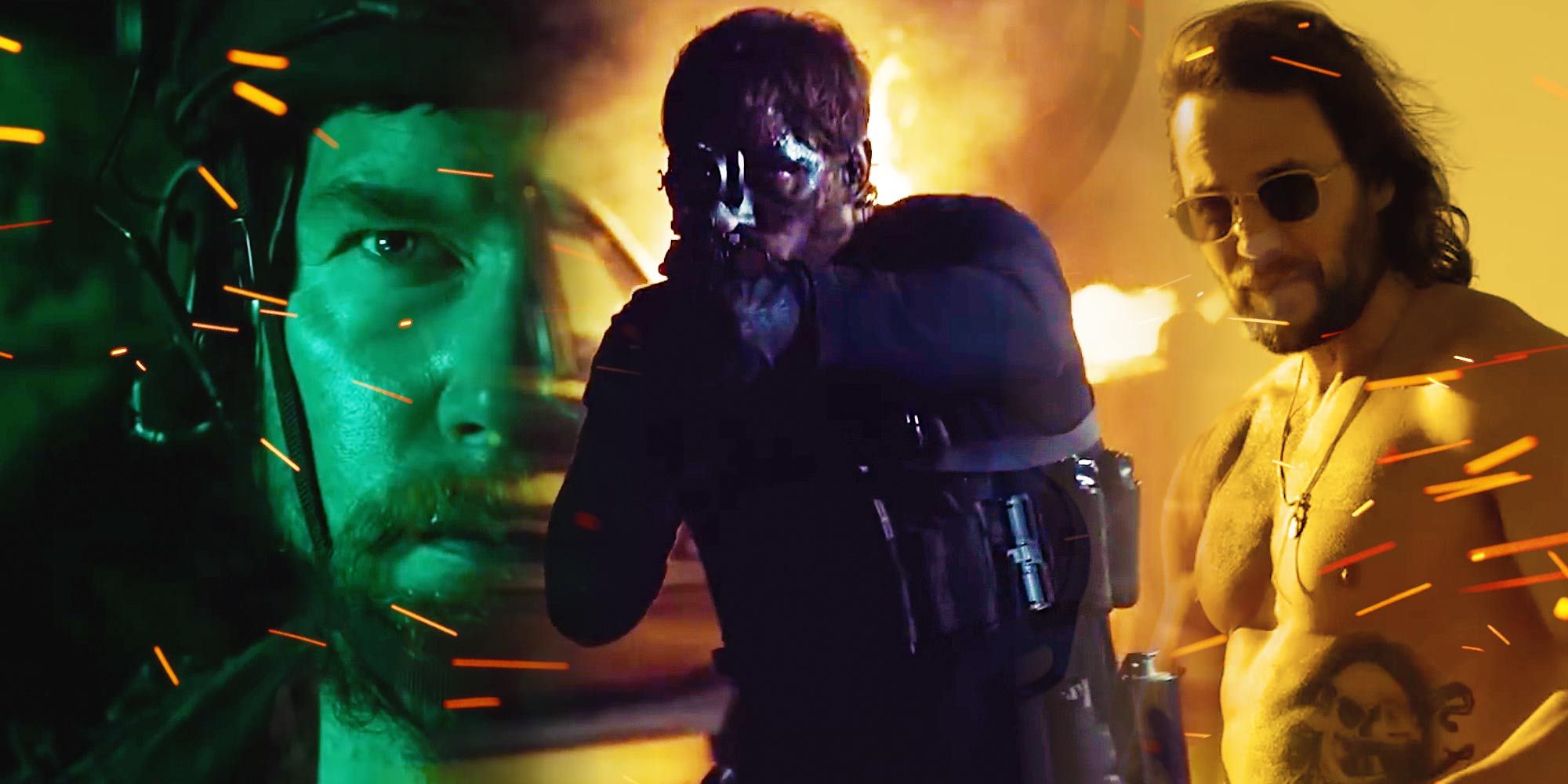 Warning: This article contains spoilers for The Terminal List season 1

The ending of The Terminal List season 1 finds Chris Pratt’s James Reece having accomplished his mission, but at a great cost that will surely play out in future seasons. The Prime Video series is an adaptation of the novel of the same name by former Navy SEAL Jack Carr, which debuted its entire 8-episode season on July 1st. The show has garnered positive attention as a welcome addition to Prime Video’s military thriller adaptations, which include the likes of Jack Ryan with John Krasinski and Reacher with Alan Ritchson.

Joining Pratt’s Reece on The Terminal List‘s journey of revenge and retribution is a cast that includes Riley Keough and Arlo Mertz as his wife and daughter, Taylor Kitsch as his close friend and confidant Ben Edwards, Jai Courtney is the devious Steve Horn, Jeanne Tripplehorn as Secretary of Defense Lorraine Hartley, JD Pardo as FBI Agent Tony Layun, and Hustlers star Constance Wu as reporter Katie Buranek. The Terminal List follows Pratt’s Commander Reece as his Navy SEAL team (Alpha Team) is ambushed, leaving him as the lone survivor. Struggling with memory problems after finding out he has a brain tumor due to an experimental drug, Reece suddenly loses his wife and daughter, sending him on a mission of vengeance that leads to the highest levels of government in a conspiratorial cover-up.

Reece creates a list of those who must die for causing the death of Alpha Team and his family, the titular “Terminal List“, which prompts him to begin killing those on it one-by-one with the help of Lone Survivor star Taylor Kitsch‘s Ben Edwards, while attempting to uncover the truth with Wu’s Buranek. The truth comes down to who authorized an experimental drug called RD4895 for use on Navy SEALS, compromising their mission readiness, and who stood to profit from covering it up (and why). The dominoes begin to fall as Reece gets closer to completing his list, leading to a violent clash that ends with Secretary Hartley and his own friend, Ben Edwards.

RD4895 is the designation given to an experimental drug created to prevent PTSD that was authorized for testing by Secretary Hartley in conjunction with Admiral Pillar (Nick Chinlund), Commander Cox (LaMonica Garrett), and Jag Captain Howard, who have it used on everyone on Reece’s SEAL team, leading to unwanted effects, including brain tumors that cause memory loss and headaches. The drug was created by Capstone Industries, led by CEO Steve Horn (The Suicide Squad‘s Jai Courtney) and needs human trials to get FDA approval. Horn uses his influence and relationships to cut corners to get the drug approved quickly, brokering lucrative deals with a small group of insiders, starting with Secretary Hartley and leading down to Admiral Pillar and his crew, who agree to test the drug on the SEALS without their consent (they think they’re being injected with vitamin B12). While a solution was found to stop the tumors in the future, the effects on the Alpha Team are irreversible and the decision is made to have them killed in order to cover it up, with Capstone orchestrating the ambush along with their secret CIA intelligence source and the help of Admiral Pillar. Everything might have worked out fine had James Reece not survived.

When Constance Wu’s Katie Buranek writes an expose on the entire conspiracy for publication, Secretary Hartley (played by Mrs. America star Jeanne Tripplehorn) uses her inside power to halt the article from going to print. Buranek is essentially kidnapped and brought to Secretary Hartley’s compound, where she’s told the “right” story about what happened with RD4895. Hartley explains that her motivations behind approving the drug were to help the special operations community, not to profit from it (which is actually true), but she claims that she didn’t know anything about the tumors until Buranek confronted Horn just before Reece killed him (although she actually did know beforehand). It was also revealed from the logs of the mission that killed Alpha Team that Hartley could have aborted the mission/ambush at any time, but allowed it to go forward, as she rationalized that their deaths would eventually save lives as their being exposed to tumors as a result of the drug likely would have killed its distribution.

Hartley reveals her true motivations for letting Alpha Team die to Buranek, which was the eventual implementation of the now-corrected version of RD4895, that would help treat countless veterans for PTSD (and, of course, advance her career and legacy). Buranek records the confession, putting Hartley in an exposed position. Reece begins his assault at this moment, which eventually leads him to Hartley’s safe room. Chris Pratt’s James Reece is about to kill Hartley when Buranek pleads with him not to as she has evidence to destroy her reputation and make her pay for what she’s done. Unmoved by the evidence, Reece moves in to kill her, but Secretary Hartley quickly reaches for a pistol in a drawer and kills herself before he can fire a shot, showing that she’d rather be dead than answer for her crimes. Why she chose to do it herself instead of having Reece kill her is uncertain, but it’s possibly due to her own pride, which is what led her to that situation to begin with.

Months after the assault on Secretary Hartley’s compound, Reece is still trying to find out the last bit of information he needs to complete his list, which comes down to someone in the CIA being paid off via a company called Oberon Analytics. Buranek finds that Oberon routes their money through a bank in Peru, which is the tip off Reece feared, as Peru is where Edwards said he’d be heading after the ordeal. Edwards is the CIA intelligence source that was paid by Capstone to orchestrate the mission/ambush that killed Alpha Team. Aboard Edwards boat, Pratt’s James Reece confronts his old friend who reveals he was told by Admiral Pillar that Reece and his men would die of their tumors no matter what, and he figured it would be better that they died “with their boots on” than in a hospital bed. Reece questions if that was the reason or if it was because of the $20 million payout, with Edwards revealing it was both. Edwards says that he had nothing to do with Reece’s family being killed, however, and that set him on a mission of redemption to help Reece kill everyone involved with it (which had the benefit of cleaning up Edward’s fingerprints on the conspiracy). Edwards accepts his fate with Reece, knowing that there’s no walking back what he did and is executed.

The question remains of what happens to Reece’s tumor, as it’s still present at the end of the series and expected to eventually kill him. Throughout the series, Reece is seen struggling with the affects of it on his memory and his brain, taking painkillers to fight off the headaches and struggling at times to remain present, putting him on a kind of hallucinogenic journey between past and present. By The Terminal List‘s ending, James Reece sails off on Edward’s boat, there’s no resolution for Reece’s tumor, which is likely intentional as it leaves the issue to be further explored in the next season, which will no doubt be based on the second book in the series, True Believer. However, it’s worth noting that at the end of The Terminal List novel there’s a voice mail from Dr. German on Reece’s confiscated cell phone that reveals his tumor is operable. A biopsy showed that the tumor is a cerebral convexity meningioma, which is a slow-growing lesion. The doctor says he believes he can remove it surgically with a 75 percent survival rate. None of this is revealed in the show, as it is likely saving Reece’s receipt of the information on his tumor for The Terminal List season 2.

Reece is seen sailing off in Edward’s boat at the end of The Terminal List season 1. Having just killed Edwards and now labeled a domestic terrorist, Star-Lord actor Chris Pratt‘s Reece can no longer stay in the United States. On a map in the boat, Reece is seen plotting a course to Mozambique, a country in North Africa, which is where Carr’s next novel in the series, True Believer, begins. Carr has described the book as a “novel of redemption” which has Reece hiding out with friends in Mozambique where he eventually confronts some poachers, putting him back on the radar of the U.S. government. He is eventually located and rather than being taken in, is offered a Presidential pardon and immunity if he agrees to work with the CIA to take out a new terrorist threat in the form of a character named Mohammed “Mo” Farooq, of which he’s had personal experience with when he served in Iraq. If The Terminal List season 2 is greenlit it will no doubt be an adaptation of True Believer.

The ending is explained in detail for Prime Video’s new military series The Terminal List based on the novel by Jack Carr and starring Chris Pratt.