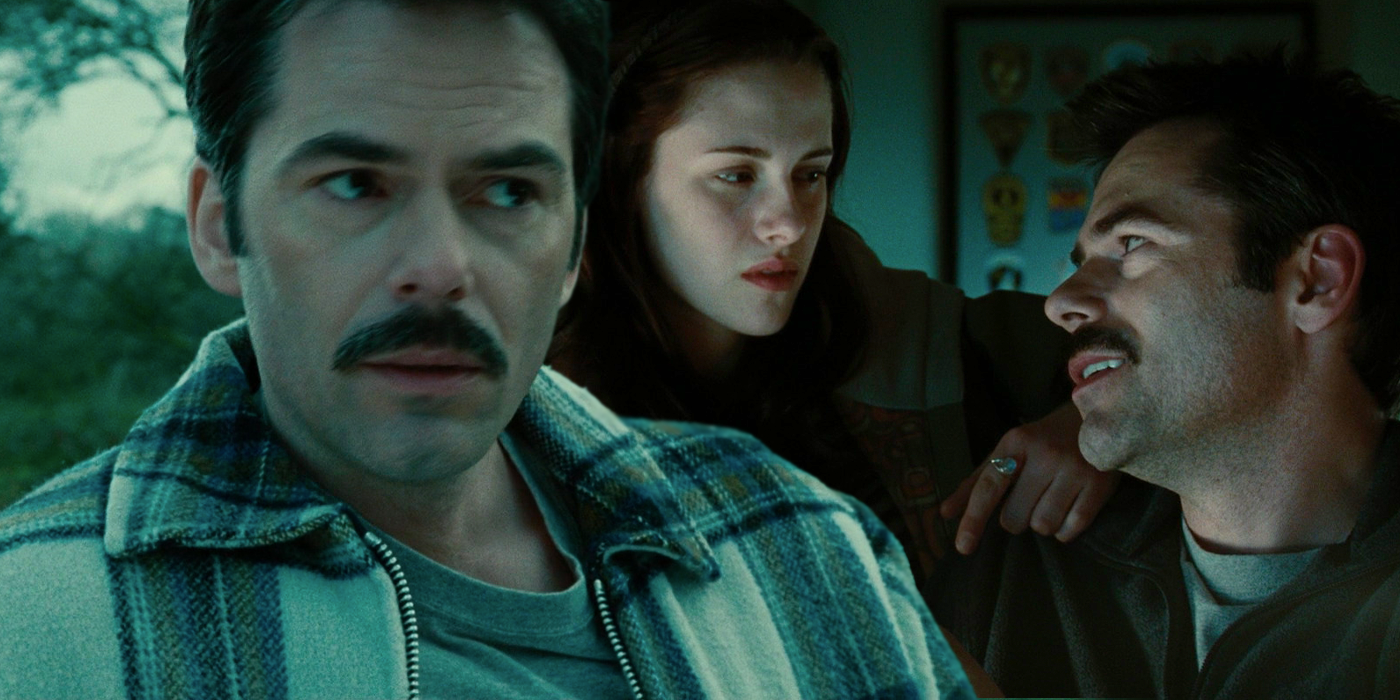 While the Twilight movies were largely faithful to the source novels, the adaptations did trim the role of Bella’s father Charlie Swan for good reason. The Twilight movies didn’t have much leeway when it came to bringing the successful best-selling book series to life onscreen. Twilight’s author Stephenie Meyer was famously adamant about ensuring the adaptations were true to the novels and the young fanbase of the series was more invested in an accurate cinematic version of the story than they were in seeing a director’s unique interpretation of the source text.

As a result, each Twilight adaptation was directed by a different director, but the series never strayed far from the story of the novels. 2008’s original Twilight, directed by Catherine Hardwicke, made a few minor alternations to the source story, but even these small changes earned the ire of Stephanie Meyer. The movies did, however, cut down the roles of some supporting characters including Bella’s (Kristen Stewart) fan-favorite father Charlie Swan (Billy Burke).

Much like the Volturi villain Caius’s backstory had to be cut from the movie adaptations since there was no room for the plot in the truncated runtime of the Twilight saga, Charlie Swan’s part in the series also ended up on the cutting room floor. In fairness to the various creators of the Twilight movies, the adaptations only wasted Bella’s father because there was no way to include his original novel scenes without derailing the plot of the series. If Charlie had too many heart-to-heart conversations with his daughter, the character would have realized that there was something seriously strange about the Cullen clan—a plot point that could have unraveled the entire Twilight saga’s story.

Charlie is pivotal to Hardwicke’s original Twilight movie adaptation and its novel counterpart, as he lives in Forks and indirectly causes Bella’s move to the small town. In the Twilight novels, however, the bemused but well-meaning father continually tries to advise his daughter on life, leading to a lot of awaked conversations, while the movies play down this role. Charlie still has some cringe-inducing chats with Bella in Twilight but this is mostly to establish that the pair aren’t close and these conversations largely stop well before the movie’s climax. It is easy to justify the presence of these scenes in Twilight’s movie adaptation, as they underline the fact that Bella feels adrift in her new town and can’t rely on her father for much in terms of life advice. However, Charlie’s lack of a professional plot line is harder to excuse.

Since the first Twilight movie added a murder mystery subplot to the milder original novel to increase the story’s stakes, the 2008 hit should theoretically have also beefed up Charlie’s role. After all, Bella’s father is also the Chief of Police in Forks and while his lack of concern over the movie’s string of killings may be convenient for Bella’s plot, it does make the cop look a little too lax. Charlie vaguely warns Bella about the grisly deaths that plague the small town throughout the movie’s runtime, but very little of Twilight‘s screen-time is devoted to the officer’s attempts to find the culprit committing these killings. The original Twilight would have been a stronger mystery if the murders committed by James, Laurent, and Victoria had more impact on Charlie, whose stoic veneer is never broken by the news that numerous locals have been murdered in gruesome circumstances.

While the Twilight movies cut many fan-favorite characters to focus on the central love triangle between Bella, Jacob, and Edward, a lot of these elisions weren’t too troubling to the fanbase. However, Twilight readers loved Charlie as, in both his book and movie incarnation, he is a stock standard awkward dad who’s not sure how to talk to his teenage daughter. This makes for a comical contrast when he is unaware that she is dealing with vampires, werewolves, and centuries-old battles between them, with the disparity between Charlie’s lectures about the facts of life and the life-or-death stakes of Bella’s secret adventures proving how clueless the heroine’s well-meaning father is. However, much like the Twilight movies couldn’t include Marcus’s sad backstory for fear of making the villain too sympathetic, the adaptations had a very good reason to cut Charlie’s role down in later sequels.

The Twilight movies needed to cut down Charlie’s role not because he was Bella’s father, but because he was supposed to be a relatively competent police chief in a seemingly sleepy small town. The more Charlie was present for each Twilight movie’s events, the more questions he should inevitably have started asking about his daughter’s life. Any worthwhile amateur investigator should have been able to discern that there was something weird about Bella’s boyfriend, while the later Twilight sequels see her make some decisions (like getting married and pregnant immediately out of high school) that Charlie could reasonably have questioned without even knowing about her beau’s supernatural secret. Thus, the Twilight movies had to cut Charlie‘s role down to avoid these awkward interrogations.

Charlie undeniably deserved better than the fate he was left with it in the Twilight movie adaptations. As the plots of the movies became more complicated and knotty, the Twilight series did not attempt to keep Charlie in the loop and, while Bella didn’t need to explain everything to her father—and doing so would have been a big change from the source material—the adaptations could at least have given him some clue about what was happening to his teenage daughter. As it stands, the Twilight movies effectively drop Billy Burke’s likable, taciturn version of the character after the first two movies, with his few Twilight appearances after that amounting to brief cameos. Paramount’s canceled Twilight adaptation handled this plot line even worse, killing off Charlie solely to give Bella an anguished, angsty reason to hate vampires. However, while the Twilight movies were right to steer clear of that grim twist, the series still under-utilized the charming Charlie for fear of making the saga’s far-fetched plot harder to justify.

While Bella’s father Charlie Swan was a fan-favorite among Twilight saga readers, there is a reason that the movie adaptations cut down his role.