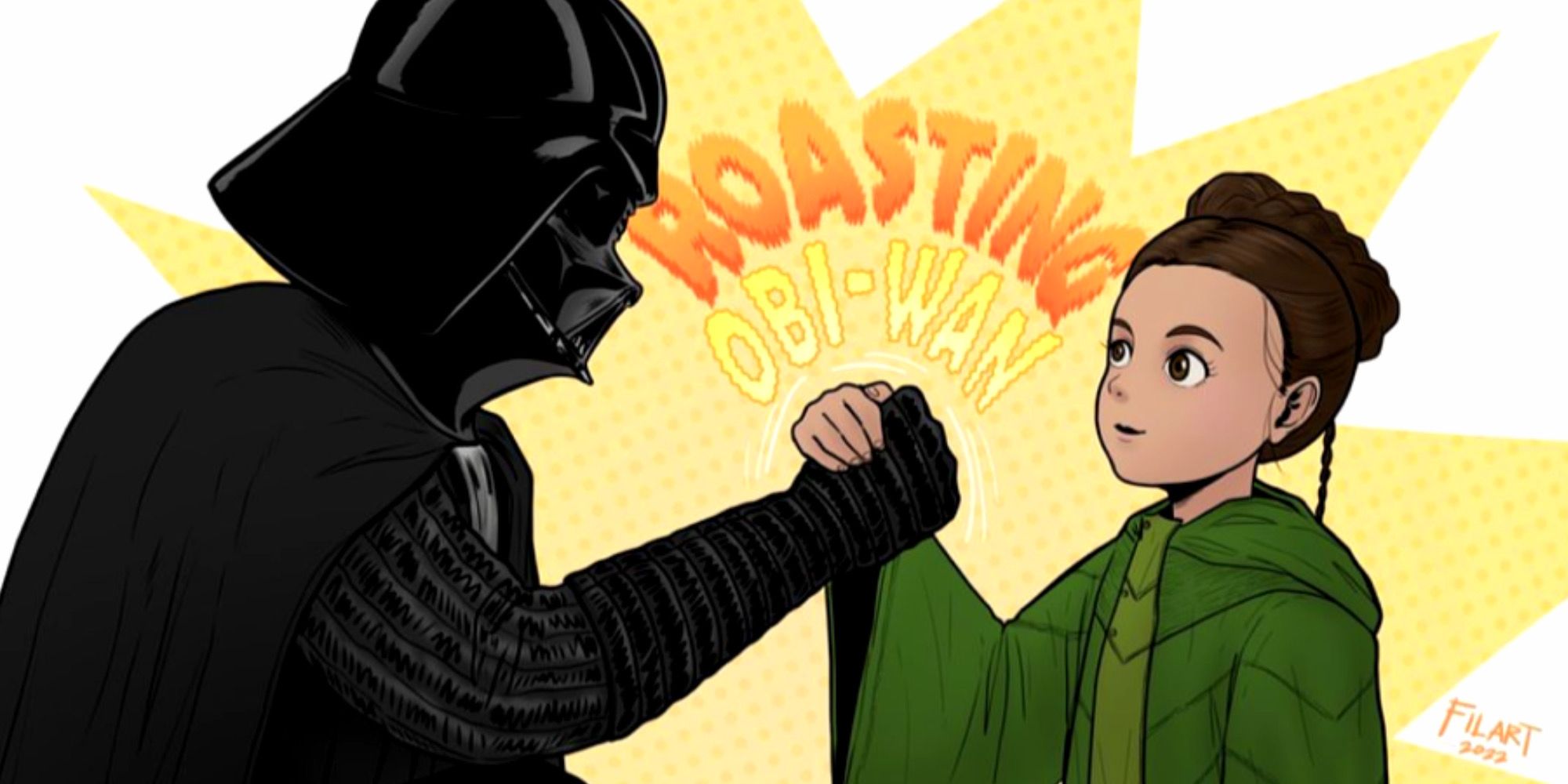 Darth Vader and Princess Leia share a hilarious bonding moment in an Obi-Wan Kenobi fan comic. The latest Star Wars series follows Ewan McGregor back in his role of the titular Jedi on a journey through self-forgiveness and rediscovery as he struggles to escape the clutches of Vader (Hayden Christensen) and his ruthless team of Force-sensitive Inquisitors. Obi-Wan must choose between his devotion to protecting Luke Skywalker and keeping Luke’s twin sister Leia Organa safe following her capture by the fierce Inquisitor Reva, the Third Sister.

Both Vader and Leia have been standout characters in the series thus far, though in very different ways. Vader’s always been iconic enough on his own, but his sheer ruthlessness in Obi-Wan Kenobi has shown viewers how he’s become so feared in the galaxy. From snapping innocent villagers’ necks to tearing apart a passenger ship merely using the Force, the Sith Lord has proven that he’ll do whatever it takes to get what he wants. Obi-Wan Kenobi‘s depiction of Leia, brought to life by by the talented Vivien Lyra Blair, has perfectly matched up with that of Carrie Fisher thanks to her quick wit and her dedication to those she trusts. She’s never been afraid to speak her mind, especially when she knows her thoughts are of relevance.

Related: Kenobi Proves Darth Vader Was Never The Master In A New Hope

Now, a fan comic for Obi-Wan Kenobi unites the father and daughter in a hilarious bonding moment. The art, created by sean.filart.art, depicts an image of Vader watching Obi-Wan burn in a fire on Mapuzo alongside one of Leia insisting that she could only pass as Obi-Wan’s granddaughter rather than his daughter. The third frame brings them together for a fist-bump moment that reads “Roasting Obi-Wan” with a caption that perfectly writes, “Like father, like daughter.” See the hilarious comic moment below:

The comic captures the true sassy essence of Darth Vader and his daughter; there is no doubt she gets her snark from him. Vader has certainly had plenty of moments where he proves he still maintains Anakin Skywalker’s sense of humor, including his dad joke in Rogue One: A Star Wars Story when he Force-choked Director Orson Krennic and warned him not to “choke on your aspirations, Director.” Leia and her wide range of insults are seen to have started from a young age in Obi-Wan Kenobi and only make this moment even more hilarious, as many viewers could see Anakin saying the very same thing to Obi-Wan before his fallout with his old Master.

While audiences know a true meeting between Vader and Leia in the series is impossible, there’s still many surprises left to be discovered in the upcoming finale of Obi-Wan Kenobi. Foreshadowing of trouble with Luke back on Tatooine suggests that the other Skywalker twin will need Obi-Wan’s attention once again, assuming the Jedi can get Leia back to safety on Alderaan in time. Vader and Obi-Wan have yet to complete their “rematch of the century” as well, which proves that audiences will be in for an epic conclusion to the long-awaited and beloved Star Wars series. The roasting may be over for Obi-Wan as of now, but his retaliation may be just as brutal the next time he sees Vader.

Next: Why Vader Doesn’t Want To Kill Obi-Wan Kenobi