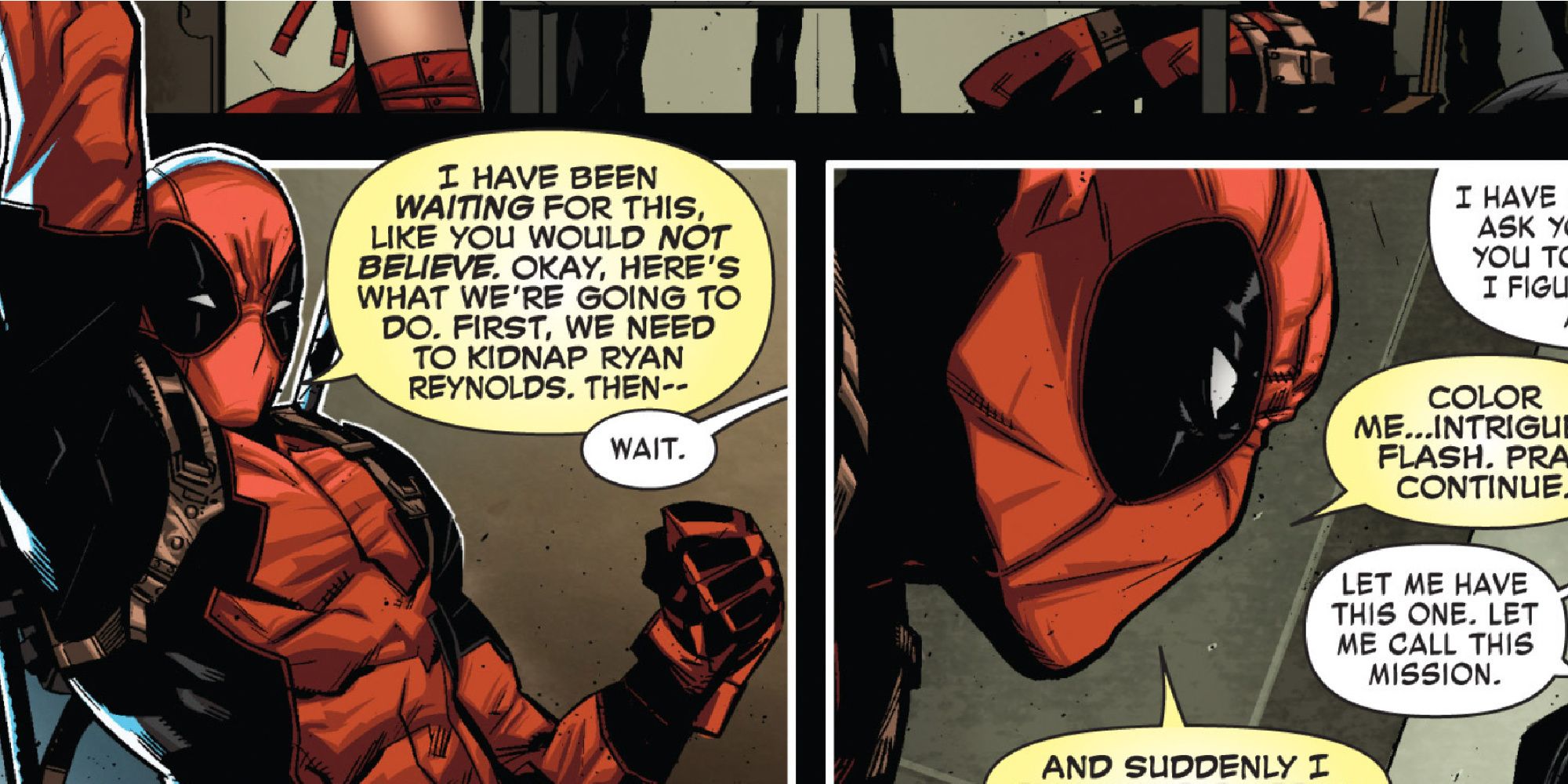 The Thunderbolts emerged in 1996, after the Avengers and Fantastic Four disappeared into another universe, leaving Earth without many of its heroes. The twist ending from their very first issue ranks not only among the best Thunderbolts comic books ever but the best Marvel Comics as well. This epic twist likely informs some aspects of the forthcoming Thunderbolts movie.

The Thunderbolts take many forms in the comics, but they consistently leverage unusual and unexpected characters for exciting stories. Deadpool wants to kidnap Ryan Reynolds in one key issue, while Hawkeye leads the team to a new era of moral responsibility in another. The best Thunderbolts comic book issues provide a snapshot of what makes the team so unique in the Marvel Universe and eventually, the MCU.

Deadpool infamously kills Ryan Reynolds in the post-credits scene of Deadpool 2, but Thunderbolts (Vol.2) #23 takes things further. This funny if dark issue exploits Deadpool’s meta-commentary to the fullest by having him push the Thunderbolts to kidnap Reynolds.

RELATED: 10 Comic Book Thunderbolts That Should Join The MCU Team

At this point, the team does one mission for their benefactor, General ‘Thunderbolt’ Ross, and one for themselves. Deadpool’s idea to kidnap Reynolds runs into issues when Venom wants to do it himself. It leads to a battle within the team that exemplifies their contentious nature.

The Thunderbolts play a role in Secret Invasion, among the most important Marvel Comics events ever, and they likely will in the MCU as well. Thunderbolts #124 stands out for showing how dark this event got, especially with Norman Osborn as part of the team.

Osborn ostensibly seeks his own redemption, but confronted by multiple Skrulls taking the guise of Spider-Man, he indulges his worst instincts. He kills them all, laughing as he does, in one of the most disturbing moments in the supervillain’s long and sordid history.

Thunderbolts (Vol.2) #18 stands out for paying off a fun if bloody three-issue story arc. Deadpool seeks out the best pizza in New York City after leaving behind the Thunderbolts’ mission to find a trio of mafiosos Frank Castle hunts for.

Deadpool finally sits down to eat a slice when the three mafiosos walk in, thinking they’ve escaped the Thunderbolts. Deadpool simply kills them and finishes his meal, a moment that crystallizes the dark humor of the series.

John Walker likely serves on the MCU Thunderbolts squad and that makes sense given his comic book connection to the team. His best moment arguably comes in Thunderbolts #147, where he fights back a jailbreak at the supervillain prison The Raft.

RELATED: 10 Things Only Comic Fans Know About The Avengers’ Friendly Rivalry With The Thunderbolts

Walker serves as Warden on The Raft after being severely injured in an earlier battle. He lost an arm and leg, but nothing holds him back. He charges headlong into battle, helping secure the escaping prisoners in an epic battle scene.

Comic book fans know Hawkeye plays a major role in Avengers lore but may not know he does with the Thunderbolts as well. No issue more than Thunderbolts #23 shows his influence on the team when he convinces MACH-1 to turn himself in.

To this point, the Thunderbolts mostly operate under the radar. But MACH-1, in his former guise as the villain Beetle, killed someone. Hawkeye’s moral guidance leads him to atone for his crimes and sets the team off in a more heroic direction.

Dark Avengers #1 offers one of the best Thunderbolts issues ever for taking the team in a new but sadly also familiar direction. Norman Osborn recruits several members including Moonstone to join his Dark Avengers, taking over the identities of heroes like Ms. Marvel.

This issue establishes a new status quo that encapsulates Baron Zemo’s original goal with the Thunderbolts. Villains masquerade as heroes, enjoying the public trust while at the same time undermining it. This era likely forms some aspect of the MCU team, as The Contessa appears to be recruiting characters who have been versions of other heroes like John Walker and Yelena Belova.

The Thunderbolts’ rosters include many powerful members, with few more so than the Juggernaut and Hyperion. That makes Thunderbolts #153 such a great issue as the two go head to head in an epic battle that proves just how powerful they are.

Juggernaut punches the cosmically powerful Hyperion into the ground, while Hyperion uses his ‘heat vision’ to burn off Juggernaut’s helmet. Though this exposes the longtime X-Men villain to potential psychic attacks, the fight ends with Hyperion defeated.

Baron Zemo earns his reputation as a world-class jerk, but he backs it up with unrivaled martial arts skills. Thunderbolts #39 provides a showcase for his fighting ability as he takes on the Scourge of the Underworld in an epic battle.

The battle lasts the entire issue, with expert action rendered by artist Mark Bagley, who went on to pencil a historic run on Ultimate Spider-Man. The issue represents a signature moment in the early history of the Thunderbolts.

Most Marvel superheroes know better than to make deals with Mephisto, among the most powerful magical beings in the Marvel Universe. The Thunderbolts did it anyway in Thunderbolts (Vol.2) #22, one of their most inventive and humorous issues ever.

The Thunderbolts work out a deal with Mephisto to return him to control of his realm (which he had been deposed from) in exchange for sending them back to Earth in order to defeat the villain Mercy. Mephisto attempts to pull a fast one, but the rigid contract Leader forced him to sign gets the team out of a jam.

Thunderbolts #1 contains perhaps the biggest twist ending in Marvel Comics’ history. Citizen V removes his mask to reveal he is Baron Zemo and the Thunderbolts are the Masters of Evil, subverting everything readers expected about the team.

The reveal alters the trajectory of the series and the Marvel Universe, with the Thunderbolts playing a key role in the thirty years since. With the team coming to the MCU, their place in comic book lore and this particular issue only magnifies.

NEXT: 10 Things Only Marvel Comics Fans Know About Damage Control