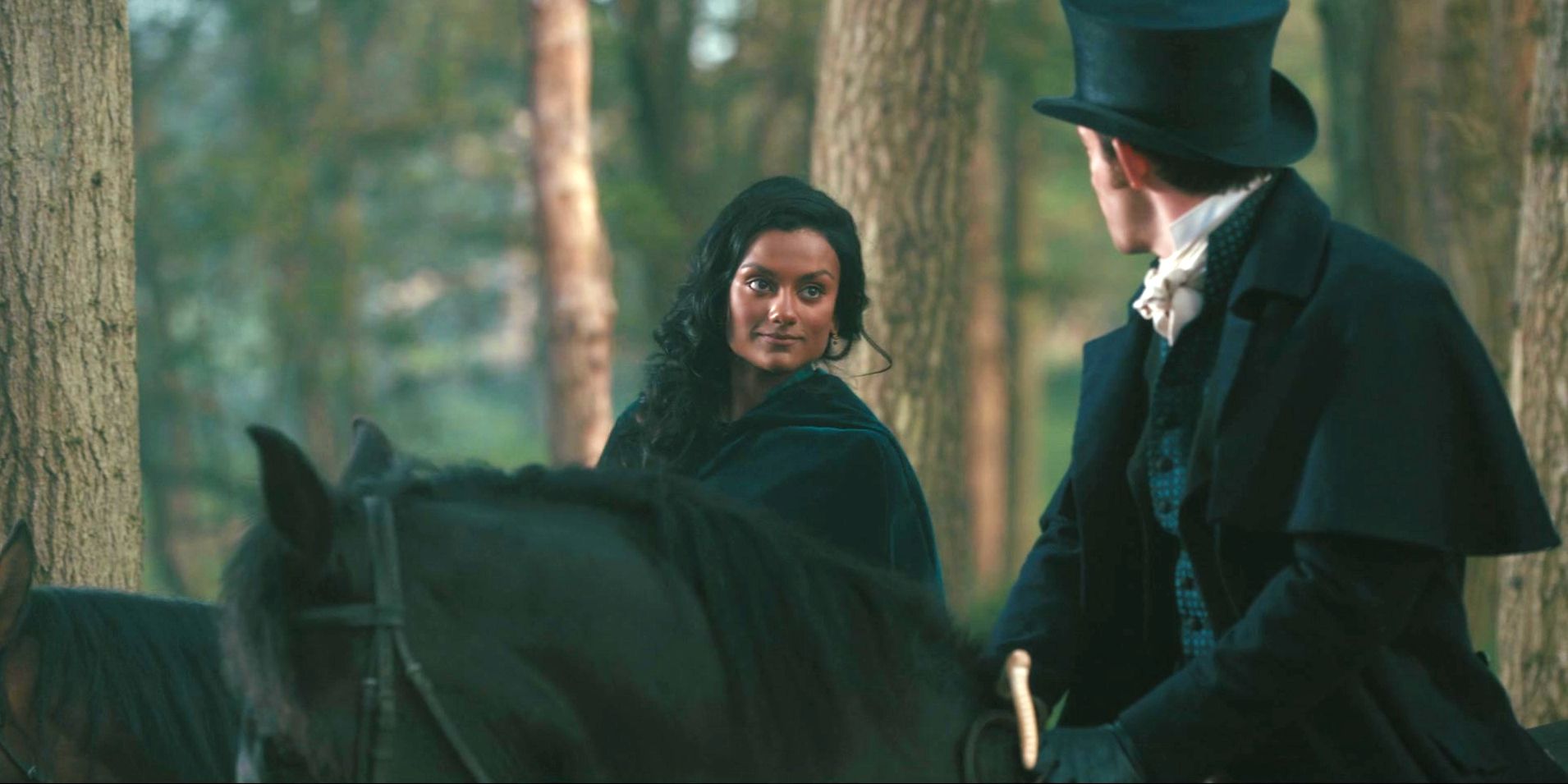 Showrunner Chris Van Dusen discusses Kate and Anthony’s first meeting and how it sets up their ending in Bridgerton season 2. After season 1 of the hit Netflix series focused on Daphne and Simon’s love story, season 2 shifts focus to the eldest Bridgerton sibling, Anthony. He’s determined to find a suitable match for himself and thinks he’s on the right path when he courts Edwina Sharma. However, Anthony clearly shares an attraction with Edwina’s older sister, Kate. Though they spend much of the season trying to fight it, they eventually realize they deserve happiness and wind up married by the end of Bridgerton season 2.

Kate and Anthony meet in the first episode of the season when Anthony finds her out riding alone one morning. Kate’s largely irritated by him checking on her and wants to be left alone. However, it’s also clear from the beginning that the two are a good match: equally stubborn and intent on having their own way. Part of the reason Kate and Anthony’s relationship works later on in the season is that they’re both fiercely independent, which also comes across in their first scene.

Speaking with THR, Van Dusen breaks down Kate and Anthony’s initial meeting in Bridgerton, sharing pages from the script. He explains how the scene is representative of their romance and where it ends up. Van Dusen says of the moment:

It establishes the main enemies-to-lovers storyline. I wanted this scene to tease the dynamic that was in store for these two characters. The attraction is just palpable, and the banter is witty and fast.

The scene where Kate and Anthony meet is a standout of Bridgerton season 2, even though it happens very early on. There’s a lot of pressure on that particular moment between the characters, especially because longtime readers of the Bridgerton books have been waiting to see it since The Viscount Who Loved Me came out in 2000. Even for those who only know the characters through the show, the meet-cute is a highly anticipated moment in any romance. If done poorly, it can sink a couple right then and there, with audiences unable to invest in their love story.

Luckily, Kate and Anthony’s first meeting in Bridgerton does exactly what it needs to do. As Van Dusen says, it features their trademark snappy banter and fizzy chemistry right off the bat. The scene also makes it clear that Kate has no problem standing up to Anthony, which helps make them easy to root for as a couple. Additionally, after Anthony faced criticism in season 1 for his controlling behavior, particularly around Daphne, seeing him so clearly enamored with Kate from their first meeting endears him to viewers. With Bridgerton season 3 set to focus on Colin and Penelope’s romance, audiences may not see quite as much of Kate and Anthony going forward. However, season 2 serves as a satisfying and complete love story for the couple if need be, from their very first scene to their eventual marriage.

Bridgerton season 2 showrunner Chris Van Dusen breaks down Kate and Anthony’s memorable first scene together and how it sets up their love story.